Notre Dame vs. Oklahoma preview: How the BCS was won

Z.W. Martin previews Saturday night's match up between the Notre Dame Fighting Irish and Oklahoma Sooners. Is this the beginning of the end for the Irish or just the beginning?

Share All sharing options for: Notre Dame vs. Oklahoma preview: How the BCS was won

After the Irish were finished dismantling Michigan, I turned to a fellow bar patron, and ND fan, and said, "Holy shit! Notre Dame's gonna be undefeated going into Oklahoma."

"Maybe," he said. "They still have to play Stanford."

Well, I was right about Stanford. And I've been right about every team the Irish have faced this season. But, more importantly, I've been right about the Fighting Irish. I know this team. Before all the national pundit attention, I was touting their defense as the second best in the country. I called Stephon Tuitt "Julius Peppers 2.0". I've even recently compared them to the best defense in the NFL: the Chicago Bears.

And I'm scared I'm right about the Sooners, too.

Those are the points and total yards accrued by Oklahoma's offense over the past two weeks against Texas and Kansas, respectively. Over the same two weeks, Notre Dame has scored 37 points combined. The Sooners scored more points in two separate quarters (23 and 28) than the Irish did against Stanford (20) and BYU (17) total.

Unlike the Irish, Oklahoma does not have a QB controversy, but a two-headed Power Couple known as Blandry (Landry Jones and Blake Bell). I may have made up that Power Couple Name, but the point remains: they are scary good. Jones, a senior, is the thrower, tossing for 1,644 yards, 12 TDs and only 3 picks with a completing percentage of 62.7. Bell, the runner, has already rushed for eight touchdowns. PS Bell is rather large. 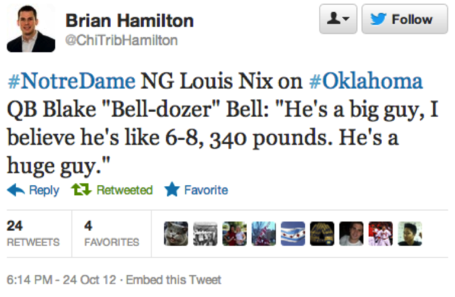 I don't want to get into the rest of the offense mostly because it's Oklahoma and, obviously, they have playmakers everywhere, so why bother? Let's get into the HOWEVER instead.

Besides all of this scary stuff, the only team that the Sooners have faced resembling Notre Dame was Kansas State and they lost at home, no less. The Wildcats and the Irish feature run-heavy, time consuming offenses and stifling defenses. Against the KSU attack, Oklahoma put up only 19 points, losing by five. Also, keep in mind, outside of the aforementioned Wildcats game, it's not like Oklahoma has played a good defense.

It's no secret by now Notre Dame depends on their defense to secure wins. Manti Te'o is probably the best linebacker in the country. Tuitt is a pass rushing monster. Add the rest of the front seven and an underrated and very athletic, ball-hawking secondary and it shouldn't be a surprise they are 7-0. But it would be a disservice to neglect to mention the Sooner defense. They are a tick below the Irish statistically, but boast either a junior or senior starter at every positon but one, and haven't allowed more than 21 points to date.

This combination of offense and defense is something the Irish have not yet seen. It will be their hardest test to date and probably all year. (Suck it, USC.)

The Irish defense is arguably the best in the country, holding opponents to an insane 9.4 points per game, including shutting out BYU in the second half last week to allow the limping Notre Dame offense to pull out a 17-14 victory. But everybody already know this. Lets move on.

Everett Golson is supposed to start on Saturday and lets hope he is the Miami (FL)-Golson and not, well, pretty-much-every-other-game-Golson. This means he needs to do two things: 1) Scramble FORWARD and not laterally. The redshirt freshman often stops checking down after his first option is covered, moving to his right, hoping for someone to get open. This usually means a sack or incompletion. When he looks to use his athleticism and scramble for positive yards, he is rather effective. 2) Find mismatches at the line of scrimmage and take advantage of them. Too often T.J. Jones or Tyler Eifer -- a.k.a the best tight end in college football -- specifically, are left in one-on-one match ups and too often Golson neglects them. Golson needs to trust their abilities and give them a chance to do things like this or this.

Hopefully, Golson will not be the story of the game, because if he is, it means Notre Dame is in trouble. Look for the Irish to continue to pound the ball with the best three back attack in the country -- Cierre Wood, Theo Riddick and George Atkinson III. Coach Brian Kelly will do whatever he can to prolong drives to keep the high-powered Sooner offense off the field. The play clock will be near zero on every snap, while the above backs will be rotated often to keep them fresh and the Oklahoma defense on their toes. (Each back has complimenting skills: Wood's the best runner. Riddick's the best receiver. Atkinson III is the fastest.) If the Irish offense can come close to their season average on the ground -- nearly 194 yards per game -- they have a have shot on Saturday. Otherwise, things could get ugly.

To this point, the Irish season has been remarkable. Some pointing to luck, others to that good old fashioned Golden Dome aura. Whatever it may be, this Saturday night's primetime matchup against the Sooners will determine the validity of Notre Dame's climb towards the summit. Or it may indicate they must push that boulder back up the mountain once again.

Xanax Threat Level*: Two bars. One taken with a shot of Jameson prior to the start of the game. The other at half, chased with half pack of Camel Lights.

*Typically this is done on a one bar scale, but that doesn't amount to the heart attack-ness of this contest.

Fun Fact While Researching This Game

A "Sooner" is basically the Wild West's version of a squatter.