New Northwestern Football Jerseys From Under Armour Have Arrived

Share All sharing options for: New Northwestern Football Jerseys From Under Armour Have Arrived

On Thursday, the Northwestern Wildcats unveiled new football uniforms for the 2012 college football season designed by Under Armour. The jerseys feature the well-known "Northwestern Stripe" in the design, and incorporate a new, sleek look that shows up on everything from the jersey to the pants to the gloves for both home and away uniform combinations. The Wildcats will debut the new look against the Syracuse Orange on Sept. 1 and at home on Sept. 8 against the Vanderbilt Commodores.

Northwestern became Under Armour's first Big Ten affiliate back in December of 2011, and the new multi-year agreement between the parties has certainly kicked off in grand fashion. Northwestern AD Jim Phillips and Under Armour executive Matt Mirchin both reiterated their excitement regarding the partnership on Thursday:

"We're thrilled about our partnership with Under Armour," said Jim Phillips, Northwestern Director of Athletics and Recreation. "Under Armour apparel, footwear and equipment offers our teams the best innovations and latest technologies to ensure we have a competitive advantage on the field of play."

"Under Armour is dedicated to making all athletes better through innovation and design and the new Northwestern uniforms are the perfect example of blending best-in-class technology with the University's rich football heritage," said Matt Mirchin, SVP Brand and Sports Marketing, Under Armour. "We are excited to see these uniforms take the field and look forward to providing the entire Northwestern athletic department with a unique, cohesive look to represent a great university."

The photos of the new threads come by way of the Northwestern apparel shop at northwestern.cbscollegestore.com, where the new home and away jerseys are on sale now: 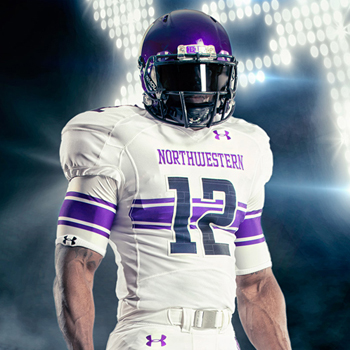 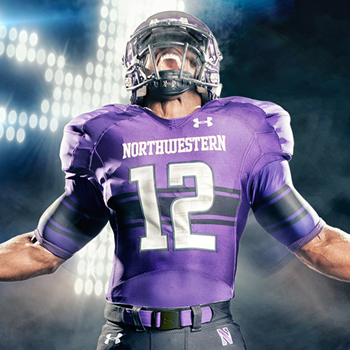