The 2012 Big Ten Tournament continued on Friday with four quarterfinal games and the top four seeds in action. The No. 2 Michigan Wolverines were the lone top seed to flirt with disaster. The No. 10 Minnesota Gophers held a 23-20 lead at halftime, but the Wolverines did enough to outscore the Gophers by three points in the second half, sending the game to overtime. Trey Burke led the way to a 73-69 victory with 30 points while Tim Hardaway Jr. chipped in 20 points.

The No. 1 Michigan St. Spartans cruised to a 92-75 victory over the No. 9 Iowa Hawkeyes. Draymond Green powered the offense with 21 points and 10 rebounds while three other scored at least 10 points.

The Spartans will play the Wisconsin Badgers on Saturday. The Badgers defeated the Indiana Hoosiers, 79-71, with 13 three-pointers. Rob Wilson scored 30 points off the bench, dropping seven three-pointers for 21 of those points.

Here is an updated bracket: 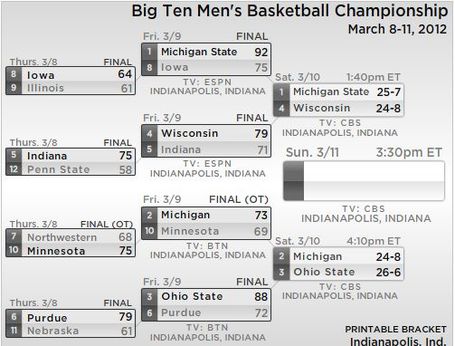 For more on this game stay with SB Nation Chicago. News and notes on college hoops teams around the country can be found at SB Nation's college basketball news hub.