What, you thought a single day would be enough to commemorate the fall of the Heat? Ha! The destruction of the Death Star was celebrated for days, man. That's the only historical precedent I can think of. This thing is just getting started, and with a boring baseball-only summer looming, I may just keep writing about the Mavs until the NFL ends its labor dispute. Don't put it past me.

Yesterday was so much fun. This picture of Dirk and Weezy celebrating in the club made me want to become either a professional basketball player or a professional rapper as soon as possible. Seems like such a dope lifestyle. DeShawn Stevenson's mind-blowing anti-LeBron t-shirt was something, too. So was the next Michael Jordan's (Stevenson, not LBJ) declaration that the Heat are 'classless'. When a bro with *multiple* face tattoos and a five dollar bill inked on his neck says something so damning, you know it's serious.

Stevenson reached out to Soulja Boy after the Cavs took a 2-0 lead. After the creator of "Crank Dat" got the Verizon Center crowd rowdy by doing his famous dance as his song blared over the loudspeakers, Stevenson drilled five 3-pointers while harassing James into an off night during a lopsided Washington win.

I dare you to tell me this isn't an all-time great NBA moment.

Unfortunately, I feel guilty writing about the Mavs at SB Nation Chicago without a local tie-in. That's why I'm sending fist pounds and chest bumps out today to a man who rarely receives them: Tribune columnist David Haugh.

Haugh exists in the weird place in the Chicago print media landscape: he's not trying to play a WWF heel like Joe Cowley (or Jay Mariotti before him), he's not offensively lame like Rick Morrissey, he's not some hot-shot radical with krazzzy ideas like new kid on the block Rick Telander. I really have no problem with Haugh, though I'm sure some of my blogging brothers would hypothetically reach through the computer screen to slap me the face for that opinion.

Haugh's column in today's Trib includes one of the most absurd media tidbits in recent memory.

Dirk Nowitzki was a tall, unpolished and largely unknown shaggy-haired blonde kid smoothly dropping one rainbow jump shot after another the way he just did in leading the Mavericks to the NBA title. At one point the 6-foot-11 Nowitzki hit so many 3-pointers in a row that Chicago broadcaster David Kaplan, in town to cover the Final Four for WGN-AM 720, felt compelled to call his friend after observing the 19-year-old's jaw-dropping shooting display.

"Kap called me saying there's this 7-footer making all these 3s and wanting permission to offer him a scholarship for Northwestern on the spot,'' O'Neill recalled Monday. "I said, you gotta be kidding me … but OK.''

Here are my top three reactions to ****unbiased media member**** and unabashed schmuck David Kaplan offering a scholarship on behalf of Northwestern to a teenage Dirk Nowitzki.

Any of the three will do, really. This may or may not have happened, too.

"He told me, 'Sounds great, I'd love to set up a visit,' '' Kaplan said. "Then everybody saw him play, and there was no doubt he was going pro.''

You think the Wildcats could have finally made the NCAA Tournament with Dirk in tow? Do you think Kaplan was also responsible for signing Drew Crawford? What about Juice Thompson? Does he work for DePaul? Because, if so, that would explain a lot. Can we blame him for Alex Legion, too?

Anyways, Dirk. Almost nearly a Northwestern Wildcat. I'd imagine this haircut would look great with some purple threads. 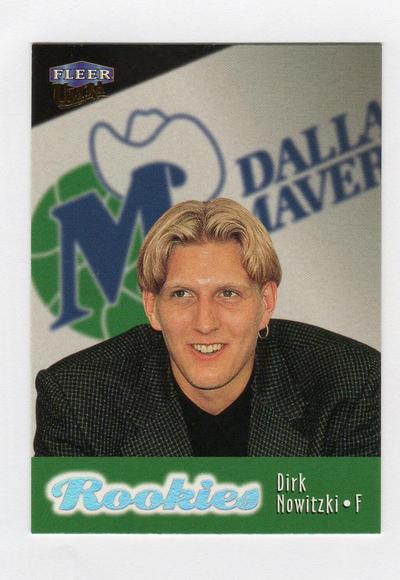