In a quarter that has seen over three hundred rushing yards, a receiver catching a ball while flat on his back, and a wide receiver pass that resulted in a pick six, the Wrigleyville classic has thus far lived up to its hype.

While only one end zone is being used for offense, the fans of the east end zone were treated to a Northwestern interception touchdown return, as Brian Peters blatantly disregarded this sign. 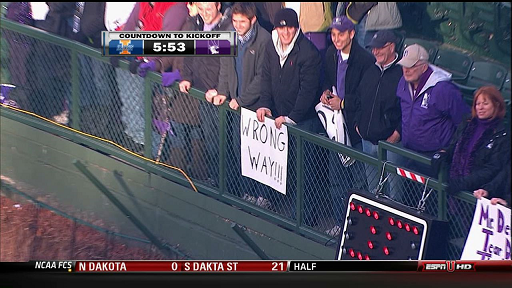 Perhaps out of fear for his safety, Peters was tackled by his own teammates before he could run into the padded brick wall.

The stars of the first quarter are the offenses, specifically Illini running back Mikel Leshoure who had over a hundred yards and two touchdowns, and Northwestern running back Mike Trumpy, who had an 80 yard touchdown scamper.

Passing yards have been hard to come by for both teams, with more interceptions than receptions from the quarterbacks.

At the end of one quarter, the Illini lead 21 to 14, with both teams trying to get their defenses in order after such a high scoring first quarter.