The polls agree. The North Carolina Tar Heels are the team to beat according to both the ESPN / USA Today and the AP Poll. The Big 10, however, does not shy away either poll. With a total of five Big 10 schools getting votes in the early rankings, the Ohio St. Buckeyes presently lead the way with an impressive No. 3 ranking.

The Illinois Fighting Illini made their first showing in the 2011 college basketball rankings, receiving two points and a tie for 44th place -- not great by any stretch: 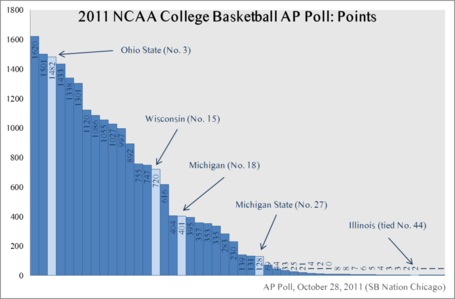 Even the Wisconsin Badgers at No. 15 have a significant climb to the top five, which sit on a plateau of their own. Interestingly, the Big 10's official preseason favorites ranked the Michigan St. Spartans third in the conference, with the Michigan Wolverines un-ranked -- quite different from the AP poll's standings. The stately rivalry will no doubt enjoy this bit of fodder for the upcoming season.

The Fighting Illini schedule begins in two weeks with a home game against Loyola-Chicago. The Illini will not face Ohio State until January 10, 2012, featured on ESPN. They will face Wisconsin two weeks later on January 22, also at home.