The White Sox are down and nearly out. SB Nation Chicago's Ricky O'Donnell takes a look at how the last 10 games have undone a season's worth of goodwill.

Share All sharing options for: The White Sox's collapse examined

For decades and decades, players and coaches have repeated the same refrain: wins and losses are all that matter. This is about the truest statement in the sports world, a place which offers a rare absolute gauge of success other professions -- like, say, teaching -- will never be able to enjoy. From a fan's perspective, though, a bad team can be fun, at least once you've fully come to grips with the cold reality of the situation. Expectations are everything. When JaVale McGee sprinted the wrong way down the court as teammate John Wall tried to set up a play at the offensive end last season, any Wizards fan worth their salt had to find a chuckle in such despair. Same can go for the trigger-happy, gun-slinging quarterback of a miserable, mathematically-eliminated football team: there's comedy in the sorrow, a lesson best remembered to retain sanity.

But bad baseball? There is nothing enjoyable about bad baseball. Bad baseball is just depressing. And as they fumble their way to the finish line, the Chicago White Sox are packing a season's worth of bad baseball into a 10-game stretch.

Baseball isn't fair. No matter if you root for a big market club or a financial bottom-feeder, this should be apparent to everyone. The game's lack of budgetary restrictions leads the Yankees to pay Alex Rodriguez and Mark Teixeira as much as the Pittsburgh Pirates pay their entire roster. It's a cruel fact of life counterbalanced in the playoffs, where a hot team can defeat a much more talented team because baseball squads are built to succeed over the course of 162 games, not a best-of-seven series. There's simply too much luck involved in the sport. Timely hitting can't be predicted no matter how much money the middle of your order makes. But just as a team can catch fire late in the season and go on a fairytale run, a team can also undo five months worth of quality work in just a few poorly played series.

This is shaping up the story of the 2012 White Sox.

From May 29 to September 25, the White Sox occupied first place in the AL Central for all but seven days. After defeating the Detroit Tigers in a makeup game on September 17, the Sox held a three-game lead in the division with 16 games to play. The Sox would win the next night too, a series opening victory against the Royals, the same team that effectively killed the season. But since defeating Kansas City, the White Sox have been in a certifiable tailspin: they've lost eight of nine, the only victory coming thanks to some straight-up hero shit from Adam Dunn.

Dunn's three-run homer in the eighth inning to grab victory out of the jaws of defeat last Monday vs. the Indians is supposed to be the type of moment that sparks a run. If only real life worked out like the movies. The Sox have been just as bad in the three games that have followed Dunn's heroics as they were in the five games that preceded them. A little oasis of joy in a desert of sadness. In this situation, it simply isn't enough.

The numbers during the South Siders' September swoon are eye-popping. Over the last 10 games, the White Sox are hitting .123 with runners in scoring position. During a heart-breaking 3-2 loss to the Rays on Thursday night, the Sox loaded the bases twice and scored a total of two runs -- one when Dayan Viciedo was hit by a pitch, the other when Paul Konerko grounded into a double-play. These are the signs of a bad baseball team, something the White Sox definitely are right now.

It's fair to point out the Sox were never supposed to be in this position anyways, fighting the Tigers for a division title on the last week of the season. In a vacuum, it reads as an enjoyable, successful campaign. Oh, but expectations change. When Adam Dunn, Jake Peavy and Alex Rios turned in throwback campaigns after each was dismal in 2011, it changed. When the Sox traded a heaping pile of garbage to the Red Sox for Kevin Youkilis, it changed. The White Sox are to be lauded for getting us all the way to football season, for keeping our attention this long, but as the September air has cooled the city and the Bears have regained their footing as Chicago's lifeblood, the Sox seem as irrelevant as they are fading.

Case in point: with a division title on the line and seven games to play, U.S. Cellular Field was 45 percent full on Thursday. There were only 18,000 fans in the stadium.

The White Sox aren't dead yet, it just feels that way. This entire season has been characterized by long winning streaks and long losing streaks being paired side-by-side. For example:

With six games left, it's time for the White Sox to start another winning streak. All six would be nice, but even that doesn't assure a play-in game with Detroit, much less a postseason spot. Anyone following the team knows how unlikely it is. The White Sox are broken, and they wore it across their faces on Thursday. Look at these dudes: 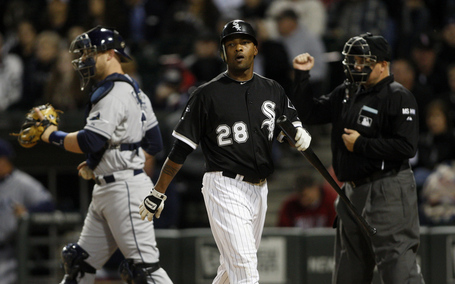 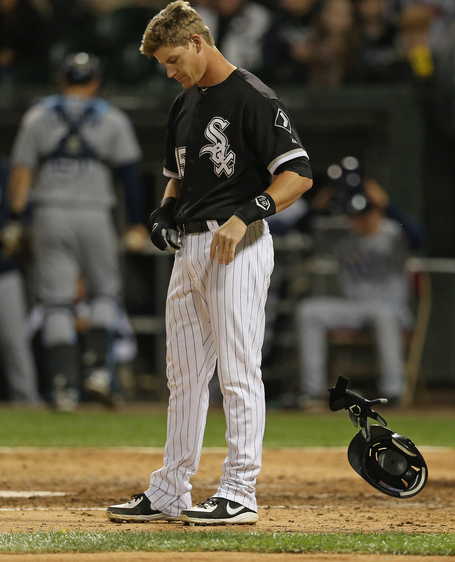 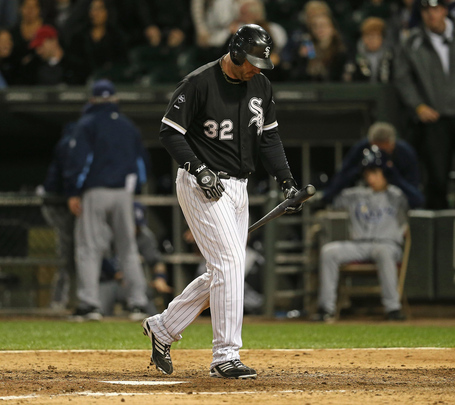 Esteemed sports writer Joe Posnanski took it a step further after watching the Sox lose to the Indians earlier in the week: "I’ll just say it: I cannot remember watching a more dead baseball game that actually mattered."

These White Sox will ultimately be remembered for an ill-timed, team-wide slump and for their struggles inside the division: 6-12 against the Royals, 6-12 against the Tigers. This isn't quite on the same level as what the Red Sox and Braves did to their fans last season, but it's close: the White Sox have collapsed under the weight of a stretch run, becoming feeble in every phase.

It's a terrible turn of events in an otherwise sunny season. Baseball's 162-game schedule may feel excessive, but this September has proven without a doubt that all of them count.