Share All sharing options for: Kevin Youkilis Hits Two Doubles In His Return To Fenway Park

The Chicago White Sox were defeated by the Boston Red Sox 5-1 in the opener of a four-game series on Monday night at Fenway Park, but it was Kevin Youkilis' return to Boston that stole the headlines. Youkilis won two World Series for the Red Sox before being traded to the South Side at the end of June due to the emergence of Boston's 24-year old third baseman Will Middlebrooks. Youkilis' hard-charging style of play made him a fan favorite during his time in Boston, and Fenway faithful showed their appreciation with a voracious standing ovation before his first at-bat. Youkilis singled in his first plate appearance, and would later rope two doubles to finish 3-for-4 with a run scored on the evening.

The trade for Youkilis has certainly paid immediate dividends for the White Sox.

Here's a photo of the reception Youkilis received at Fenway prior to his first at-bat. 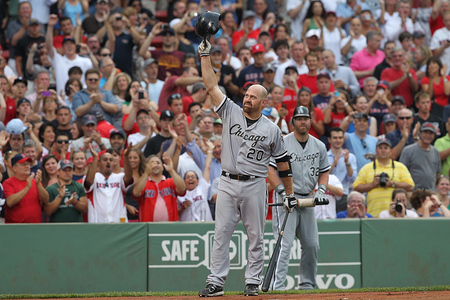 For more on the White Sox, please be sure to check out our blog South Side Sox and SB Nation Chicago for all the latest news and updates. For more MLB coverage, head over to Baseball Nation.