White Sox Vs. Astros Lineups: Konerko Back At 1st Base Against Houston

Share All sharing options for: White Sox Vs. Astros Lineups: Konerko Back At 1st Base Against Houston

The Chicago White Sox (32-25) take on the Houston Astros (24-33) on Friday night, opening a three game set at US Cellular Field.

The White Sox will have 1B Paul Konerko back and manning the first bag. Konerko missed three games earlier in the week, but returned to a designated hitter role in Thursday's 4-3 win over Toronto. He has been a key component to the White Sox offense so far this season, hitting a .371/.451/.618 slash with 11 home runs.

Chicago enters the series with a 1.5 game lead atop the AL Central standings. Here is a look at the White Sox lineup, courtesy of the team's official Twitter account: 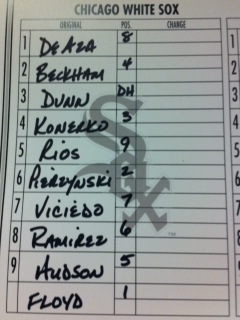 For updates, stay tuned to SB Nation Chicago. For more in-depth coverage, visit White Sox blog South Side Sox. Also be sure to check out Astros blog Crawfish Boxes. For more from around Major League Baseball, head over to Baseball Nation.