PHOTO: Alexei Ramirez Smokes A Pre-Game Cigar In The Dugout

Share All sharing options for: PHOTO: Alexei Ramirez Smokes A Pre-Game Cigar In The Dugout

Instagram has become the Internet's leading provider of pictures of leaves and sepia-toned portraits of your brunch, but apparently the recently sold picture-based social media service is also capable of housing an inherently cool sports photo.

We told you yesterday that ESPN Chicago columnist Jon Greenberg slipped a funny anecdote about White Sox shortstop Alexei Ramirez smoking a cigar in the dugout before a game into his obligatory All-City team selections. Now we've got a picture of Ramirez and his stogie, which was found on Instagram. 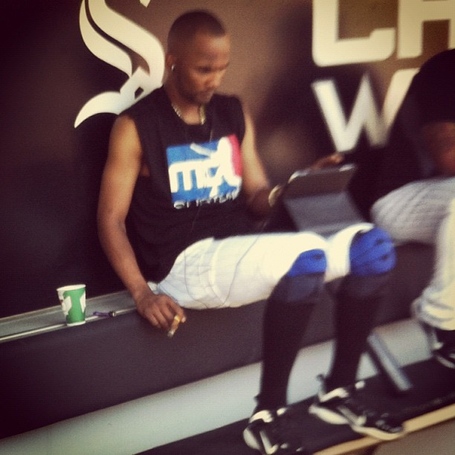 The photo is from June 7.

Considering that chewing tobacco has long been ingrained in baseball culture, Ramirez's culturally-fitting cigar probably isn't too big of a deal. This is unless Ramirez is smoking a Cuban cigar, which would be, of course, illegal. In which case: scandal! No, not really.

Ramirez is one of two Cuban players on the White Sox's roster, along with left fielder Dayan Viciedo.