Did Alexei Ramirez Turn His Olympic Gold Medal Into A Necklace?

Share All sharing options for: Did Alexei Ramirez Turn His Olympic Gold Medal Into A Necklace?

Chicago White Sox shortstop Alexei Ramirez lost the gold medal he earned as a member of the Cuban national team at the 2004 Olympics when his wife was moving some of his personal belongings between the Dominican Republic, Miami and Chicago. It was replaced earlier this month in a touching pregame ceremony when one-time South Side World Series hero Jose Contreras surprised his fellow countryman with some new hardware secured and purchased by Sox owner Jerry Reinsdorf.

It would appear as if Ramirez isn't about to let his new gold medal out of sight. From the looks of it, Ramirez might be wearing the medal as a necklace during the Monday night's series opener between the Sox and Cubs. 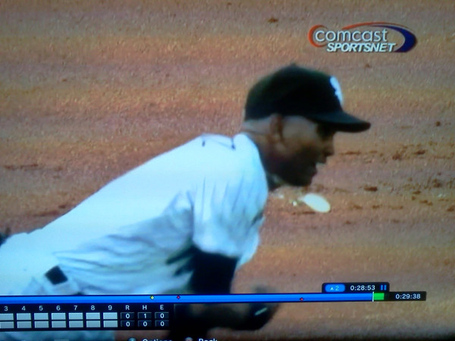 If that's not a gold medal, it certainly looks like it. Between this and Ramirez's propensity for pre-game cigars, the Sox shortstop is single-handidly adding some much needed excitement to this rather underwhelming edition of the Crosstown Series.