After Paul Konerko blasted a first inning home run off Chicago Cubs starter Jeff Samardzija in Friday's series opener of the BP Cup Super Showdown -- or whatever we're calling it now, the White Sox first baseman was promptly hit in the face in his next at-bat. Konerko sat out the White Sox's final two wins over the North Siders with swelling around his left eye, but not before he absolved Samardzija of any wrongdoing by saying "nobody gets hit in the face on purpose by a breaking pitch."

Konerko lined a double in his first at-bat yesterday, enough of a tough-guy act to get team beat writer Scott Merkin to a make one of those Chuck Norris jokes that became played out, like, four years ago.

We've got a picture of Konerko's black eye, after the jump... 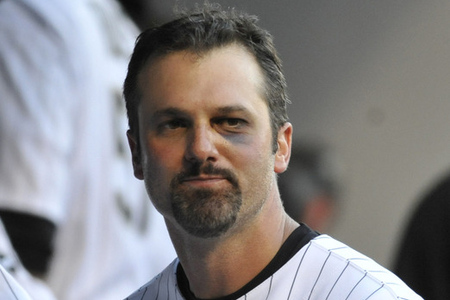 For updates, stay tuned to SB Nation Chicago. For more in-depth coverage of this series, visit White Sox blog South Side Sox and Twins blog Twinkie Town. For more from around Major League Baseball, head over to Baseball Nation.