White Sox Vs. Mariners: Chicago Avoids King Felix, But Can They Capitalize?

The Chicago White Sox (6-6) open up a three-game weekend series against the Seattle Mariners (7-7) on Friday night. Strikeouts have been a problem, but they will avoid Mariners ace Felix Hernandez on the trip.

Share All sharing options for: White Sox Vs. Mariners: Chicago Avoids King Felix, But Can They Capitalize?

White Sox batters struck out a season-high 16 times on Thursday and are tied with the Baltimore Orioles for the most strikeouts in the MLB (111), but at least they miss Mariners ace Felix Hernandez during their three-game series with the Seattle Mariners this weekend, right? Outside of Paul Konerko -- who has posted a spectacular .370/.442/.543 triple-slash line in the first 12 games -- the White Sox have wasted some solid pitching efforts by failing to put the ball in play when it matters most.

Over at SB Nation's White Sox blog, South Side Sox, Jim Margalus ponders the strikeout situation, and while he notes that the strikeout rate is historically high this season across baseball, he also comes away with some particularly troubling information regarding Dayan Viciedo's start to the season:

In his current form (starting from last August), his hitting zone is dramatically smaller than it was back in 2010: 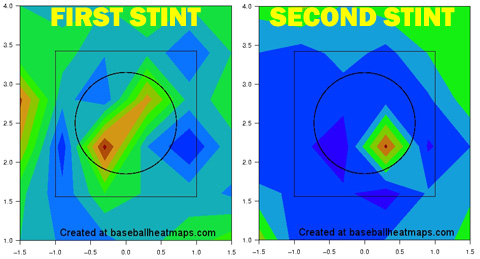 He's swinging underneath pitches he would have squared up his first time, and it's been that way since he came back to the majors last September. He's flashed the old form on a few occasions, but it's going to be difficult for the offense to find another gear on a consistent basis if he can't make good contact when the opportunity presents itself.

Lefty Chris Sale takes the mound for Chicago, while the Mariners turn to Hector Noesi. Here is some information to help you find the late-night broadcast on Friday:

For updates, stay tuned to SB Nation Chicago. For more in-depth coverage of this series, check out South Side Sox and Lookout Landing. For more news and notes from around baseball, visit Baseball Nation.