Ozzie Guillen is named one of Sports Illustrated's 'Top 100 Twitter Follows' as we recap his best-ever tweets.

Sports Illustrated released its 'Top 100 Sports Follows On Twitter' today, and it has quickly become the talk of the Internet. That likely says more about what's *not* going on than the list itself, of course: baseball doesn't come back from its All-Star break until tonight (if anyone even notices), the ESPY's are unquestionably the lamest of all lame awards shows, and while the Women's World Cup has proved to be more galvanizing than anyone could have anticipated, the entertainment value it provides is still more novelty than anything to most tried-and-true sports fans. And as you may have heard, the NBA and NFL are still locked out, too. It takes a perfect storm for something as irrelevant as SI's list today to become the talk of the town, but dammit, the stars have aligned.

SI's list includes everyone from WWF WWE wrestlers to media members to real athletes (Rory McIlroy!) to Joe Rogan. I did the math -- yes, "counting" equates to math for us journalism majors -- and I follow 20 members of the list myself -- approximately 20 percent! While there are as many worthy selections (Ken Tremendous! Gilbert Arenas!) as head-scrathers (again....Joe Rogan?), there's one name I think we can all agree was a spot-on choice: White Sox manager Ozzie Guillen. Guillen may be the lone Chicago representaitive, but at least Sports Illustrated picked the right guy.

Guillen's arrival on Twitter created a brief firestorm in February of 2010, and so far the White Sox manager has lived up to the hype. He tweets daily, alternates between English and Spanish, and can be counted on to write something funny or controversial at least once a month. On Twitter, can you really ask for anything else?

As an ode to Oz, SBN Chicago is here to recap his greatest ever tweets. Keep in mind that due to time and space limitations, many, many tweets were left on the cutting room floor.

Ozzie Gets Ejected, Immediately Tweets About It

Ozzie was ejected in the first inning of an April 27 game against the Yankees for arguing over a called third strike on Paul Konerko. Like anyone with a smartphone and a grievance is prone to do, Ozzie immediately took to Twitter to air out his complaints.

Just as Guillen expected when he typed those fateful words, the Sox manager was fined and suspended two games for the incident. 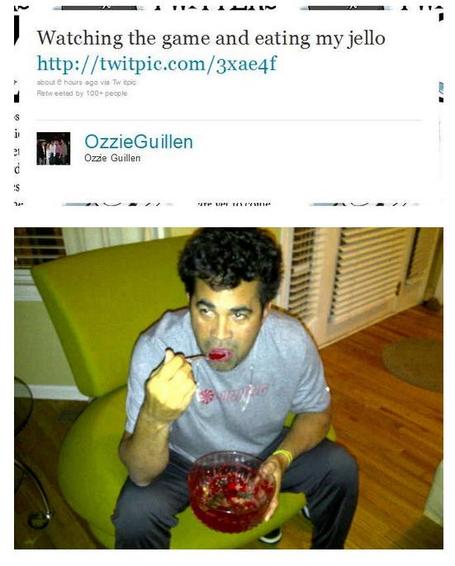 We will let this one speak for itself. 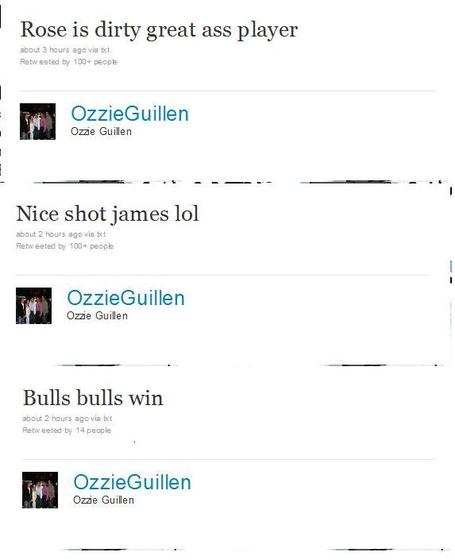 It may seem like a distance memory after the immense heartbreak of the Eastern Conference Finals, but the Bulls' regular season sweep of the Miami Heat was arguably the highlight of one of the most enthralling seasons in recent Chicago sports history. Ozzie Guillen was along for the ride just like the rest of us, and dished out of a few tweets for the ages during the Bulls' 93-89 victory over the Heat at the United Center.

As if "Rose is dirty great ass player" wasn't perfect enough, "Nice shot james lol" is my pick for the best tweet of all-time. Without trying to be clever or ironic, Ozzie perfectly summed up exactly how every Bulls fan -- nay, NBA fan? -- felt during one of LeBron's many late game failings.