Brent Lillibridge's Catch Earns A 'You Gotta Be Bleepin' Me!' From Hawk, SportsCenter's No. 1 Play

Share All sharing options for: Brent Lillibridge's Catch Earns A 'You Gotta Be Bleepin' Me!' From Hawk, SportsCenter's No. 1 Play

June 6, 2011 will forever -- FOREVER! -- go down in White Sox lore as the day John Danks earned his first win of the season. If you know *anything* about baseball, you know that 'wins' is the simplest and most clear-cut metric to prove a pitcher's worth. Or not. But still, Danks' preposterous 0-8 record seemed to be hanging around his neck like a chain too heavy, and it's certainly nice to see him finally avoid the role of the hard luck loser. Dude has damn near had it trademarked during the first two months of  the 2011 season.

But this post isn't about John Danks, it's about Brent Lillibridge, a man who could be destined for local folk hero status if his stellar play for 40 percent of this season can continue for 100 percent of this season. On Monday, he added yet another highlight to his personal growing list in the first half of this 2011 season. 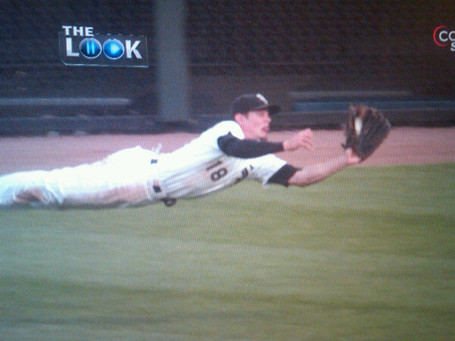 Disappointing, I know. Baseball's 19th century stance against embedding videos is one of the most perplexing and unfortunate aspects of the sports-in-the-Internet era. It reminds me, vaguely, of former Blackhawks owner Bill Wirtz's proud stance against televising his team's home games. Cable, such a fad!

Anyways, this catch. So good. Good enough to earn the No. 1 spot on SportsCenter's Top Ten plays, in fact. Head over to MLB.com to watch the full thing (ugh), complete with a terrific call from the perpetually terrific Hawk Harrelson. While 'You've gotta be bleepin' me!" is for sure awesome, I can't be the only one who would absolutely love if Hawk was somehow allowed to swear during broadcasts. I can only imagine that man curses like a sailor.