Last we saw our friend Rick Telander, the eroding Sun-Times columnist and author of the fairly great "Heaven Is A Playground", he was catering to the oldest and whitest portion of his deteriorating newspaper's audience by calling for the NBA to raise its rims. I made fun of it, and so did lots of other people. It was a pretty good time.

Want a better time? Look no further than the tweets from some of Telander's Chicago media peers coming out of the press box at last night's rain-infused White Sox victory over the Cubs. With tornado warnings being shouted over the TV and the skies turning to a comical and borderline terrifying hybrid of pink and orange, the Yank journos huddled at U.S. Cellular had some time to kill.

Telander killed time the best way he knew how. He ate 10 hot dogs. 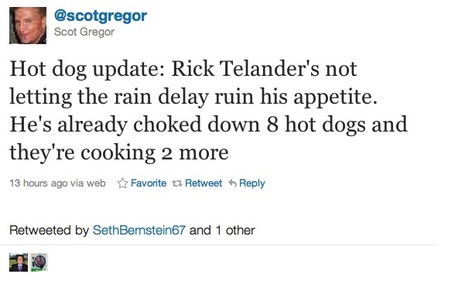 Then came the picture which caused 1,000 LOL's. Via the Trib's Paul Sullivan. 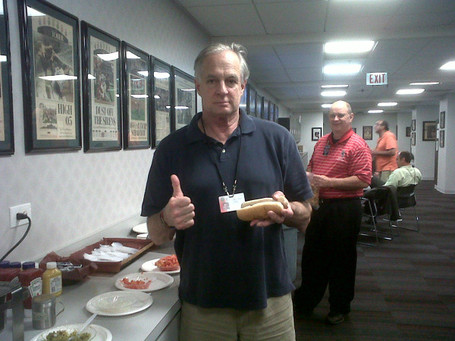 Wilt Chamberlain's 100-point game. Kerry Wood's 20 strikeouts. Adrian Peterson's 296 rushing yards.This is the kind of company we're talking about here. Can I throw out a "Joey Chestnut ain't shit!"? OK, thanks. Related: remember when The Fridge entered Nathan's Hot Dog Eating Contest a few years back and could only get four down before quitting? Rick Telander laughs at an appetite so shameful.

Big ups to Chicago media men for realizing how newsworthy this was. I think I was first notified via a few select Jon Greenberg retweets. Without it, I'd have to write about, ugh, baseball today. Gross.