I've always fantasized about having a stalker. I imagined that my overwhelming charm, good looks and sense of humour (British!) would cause some poor smitten lass to fall hopelessly in love with me, forcing her to drive by my apartment eight times a day hoping to catch a glimpse of me, while ferociously drawing Z.W. & Crazy Bitch filled hearts with arrows through them. She'd already have planned our wedding in Maui (just to piss everyone off, because she's mentally unstable) and named our first born. (Blake Elizabeth if it's a girl, Blake William if it's a boy.)

Then again, I pictured my stalker to look more like Mila Kunis than Charlize Theron in Monster. Enter Theo Epstein's stalker, Kathleen Kearney, 44, of Canton, Mass. A picture of the Cubs President of Baseball Operations' Swimfan, an explanation of her odd stalker past and the current arrest following the jump.

I call this The Power Pose: 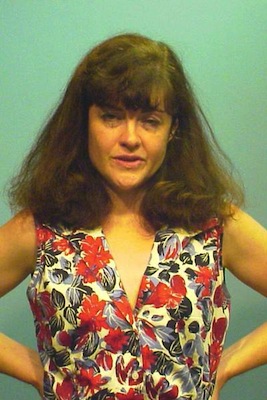 A Massachusetts woman warned to stay away from Chicago Cubs president Theo Epstein was arrested near his Lakeview home this week after telling police she was "inviting Mr. Epstein to go to church."

Kearney told officers she had been watching the home that Epstein shares with his wife Marie and young son, Jack, and was going there to extend the invitation, police said.

This, however, is not the first time Kearney has tried this kind of stunt, attempting to contact Epstein last year in Massachusetts.

Last October, sportswriter Peter Gammons wrote that police in the Boston suburb where Epstein lived at the time kept watch over his home because of stalking concerns. A police source said Kearney had previously contacted Epstein and that Massachusetts authorities were called in to investigate but no charges were filed.

Maybe I should rethink my stalker fantasy. I really hate bees.