Another Goat Shows Up At Wrigley Field

Share All sharing options for: Another Goat Shows Up At Wrigley Field

You don't have to look very far to find symbols of the Chicago Cubs' failure. There was the black cat that ran onto the field in front of Ron Santo during the team's historic 1969 collapse; more recently, the foul ball that infamously touched the hands of Steve Bartman during the 2003 playoffs was blown up in a public spectacle.

For all of the histrionics that invariably get tied to the Cubs' and their 104-year World Series drought, no symbol is more reviled than the goat. You know the story: in 1945, tavern owner Billy Sianis brought a goat to Wrigley Field during the World Series against the Detroit Tigers. The goat was promptly denied admission. Sianis would place the "Curse of the Billy Goat" on the club, and they haven't won the pennant since.

While this isn't a thing anyone actually believes in, the goat continues to be relevant symbol of the franchise's ineptitude. Every few years, a goat pops up in Wrigleyville, and swarm of media coverage follows. It happened again on Monday. 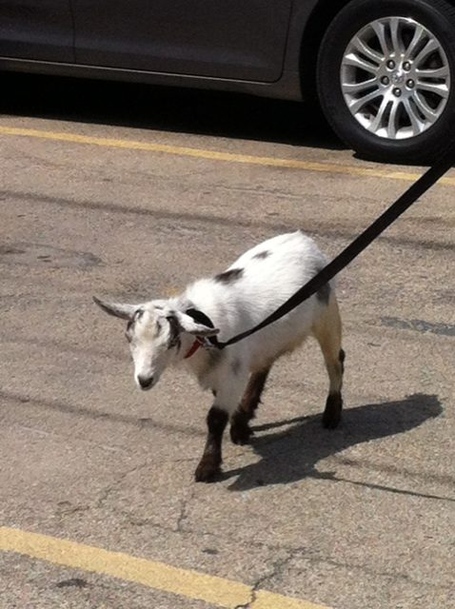 The goat pictured above is "Wrigley", who walked 1,764 miles over 95 days from Mesa, Arizona to Wrigley Field. The journey ended yesterday, when the Cubs mercifully laid to rest a 12-game losing streak by defeating the equally woeful San Diego Padres.

The goat was, of course, denied entry to the stadium. No shocker. While these stories get more played out with each occurrence, at least there's some heart behind the latest venture. The five-man group that brought the goat is trying to help raise money for the Fred Hutchinson Cancer Research Center in Seattle. Cubs owner Tom Ricketts has already donated and group's total now stands at over $20,000.

Do any of these people have jobs?

Padres Vs. Cubs: North Siders Get First Sweep Of 2012