John Axford's Letter To Media At Cubs Vs. Brewers Game On Friday Is Awesome

Share All sharing options for: John Axford's Letter To Media At Cubs Vs. Brewers Game On Friday Is Awesome

On Friday night, the Milwaukee Brewers knocked off the Chicago Cubs in 13 innings, but the game had plenty of competition for the most interesting event of the night. Especially for Milwaukee Brewers closer John Axford. He gave up three runs in the ninth inning to extend the game -- which also broke his 49-game consecutive saves streak -- but he couldn't stick around after the game and talk about it. That's right, Axford skipped out on the post-game press conference.

As it turns out, he had a terrific excuse. Axford's pregnant wife started having contractions, so Axford had to leave ASAP to get to hospital, and he was kind enough to leave a note behind for the media, complete with a brilliant sign-off: "cliche...cliche...another cliche. Gotta go!" Here is an image of the letter, via @JordanSchelling: 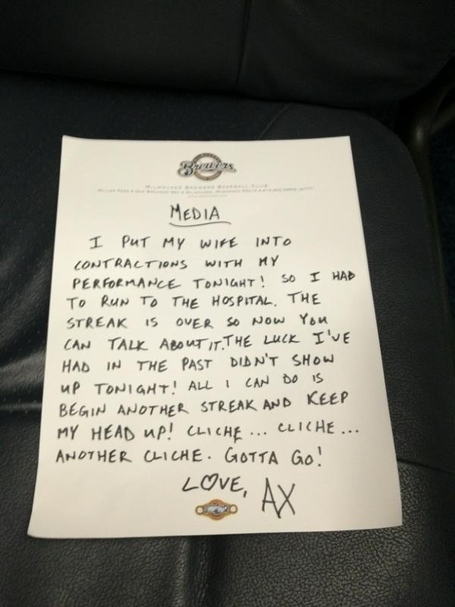 For more news and updates from around the MLB, drop by Baseball Nation with Rob Neyer, or dig deeper into the stats at Beyond the Box Score. Also, check out the team blogs Bleed Cubbie Blue and Brew Crew Ball.

Cubs Close Out Series With 8-2 Victory