Dubs On The Cubs: Where's Buddy?

Z.W. Martin's weekly Cubs column takes a look at the past week of North Side baseball and the folly surrounding Chicago's favorite ball club.

Share All sharing options for: Dubs On The Cubs: Where's Buddy?

Author's Note: The Blackhawks have just been eliminated from the Stanley Cup Playoffs. The mood is appropriate to review the past week in Chicago Cubs baseball.

Dubs On The Cubs

When I last left you, the Cubs were in the midst of a small two game losing streak. Then they lost their next four.

For six games and seven nights, Time stopped, looked around, shrugged, smoked a cigarette, played a game of 'Risk' with Death, read 'Infinite Jest', road a stationary bike, lost ten pounds and learned French*. Then the Cubs won their fourth game of the year.

I happened to be at the sixth game of their dismal run, a 9-4 thrashing by the Reds. I remember it being cold, Chris Volstad being tall and the stadium clearing out after the 7th inning stretch, sung by Bulls color man, Stacey King. It was also 4/20.

After the game, my buddy Buddy, who happened to be in attendance, texted me a few bar locations he was/going to be at. Buddy is the life of the party. A real card. Up for all sorts of tomfoolery and horseplay. A joker. A wag. A clown. Buddy is Taj from Van Wilder**.

Therefore, I convinced my crew to meet up with Buddy, only we never did. We went from bar-to-bar just missing my buddy Buddy. We kept moving, searching, chasing, but could not find our mysterious party dragon. Our endless search for Buddy eventually ended at Kirkwood. It was 4:25 p.m. Kirkwood opened at 5. We went home.

Buddy and the 2012 Cubs are very similar; a friend from your past you remember being the MOST FUN EVER. But, now that Buddy is older, more skittish, harder to meet up with, there is only disappointment and a protruding question: How did I end up outside this empty bar?

*Time understands French, but cannot speak it. That takes 12 nights.
**Not the lame Taj in the first one, but the party guy in the sequel. It's based in England. That's in Europe.

April 17, (3-8)
Marlins 5, Cubs 2
Notes: Ryan Dempster allowed two runs on four hits, while striking out eight Marlins in just six innings. Two innings later, Rafael Dolis would surrender the game winning run, plus two more for safe keeping, leaving Dempster with a no decision, an 0-1 record, a 1.33 ERA and an NL leading 23 strikeouts in 20 innings. Four days later he was placed on the DL.

April 21, (4-11)
Cubs 6, Reds 1
Notes: Paul Maholm brought some of that Pirates magic from last season, lowering his ERA to 8.36 and snapping the Cubs six game losing streak. Cubs backup catcher, Steve Clevenger had three hits on the day, bring his season average to .588. (It has since fallen to .526. Not all things are meant to last, Steve.)

April 22, (4-12)
Reds 4, Cubs 3
Notes: The Cubs threatened to win two in a row for the first time all season, but a ninth inning rally fell short as former Cub, Sean Marshall, got the save. Randy Wells made the start. He gave up six hits and walked five, but somehow only allowed two runs. Now former Cub, Rodrigo Lopez, got the loss.

April 22, (5-12)
Cubs 3, Cardinals 2
Notes: I saw one AB in this game. It was a one out, twelve pitch walk by Bryan LaHair in the ninth. It was an awesome AB. So awesome, in fact, I tweeted about it. Then Geovany Soto walked on four pitches. I did not tweet about that. Both runners advanced on a grounder to first. Tonight's hero, Joe Mather, singled to center, scoring both runners. Cubs win! Cubs win!

Marlon Byrd was traded to the Red Sox for Chicagoan, and part-time relief pitcher, Michael Bowden.

The Cubs are in last place in the NL Central and tied with the Padres for the worst record in the NL.

What I Learned This Week

If The Cubs Have A Worse Record Than The Astros By The End Of The Season...

I will let SB Nation Chicago's editor, Ricky O'Donnell, go to a bar with me.

A Picture Or .Gif To Best Explain The Week 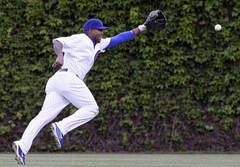 Dubs On The Cubs: A Weekly Look At The North Siders By Z.W. Martin