Carlos Zambrano awoke from eight hours of blissful sleep to be greeted by his wife's smiling face - only the greatest feeling in the world. He headed downstairs to the kitchen table where his son and three daughters were munching away at blue and red cereal. Zambrano simulated his pitching motion, and without missing a beat, his son dropped the spoon and knocked the pitch out of the park with his invisible bat. Grand Slam! The whole family cheered.

Fresh squeezed orange juice, two slices of whole wheat toast, and a banana awaited Carlos at the table. None of that processed shit he ate in Chicago. He felt invigorated in Miami. A new him, a fresh start. He even busted out fifty push-ups in the middle of his morning shower, just because it felt like the right thing to do.

He kissed his wife and children goodbye as he stepped out into the Florida sunshine. Sometimes all a man needs is a little sun on his face, a drop top Lamborghini, and an 18 million dollar salary to put things into perspective. Most brazenly rich people go to Florida to die. Carlos Zambrano came to Florida to live again.

Carlos knew that tonight was not about him. The Cubs had moved on. He had moved on. Hell, he wasn't even scheduled to pitch in the three-game series. However, this would not stop the vultures from circling. Upon his arrival, Carlos recognized scores of familiar faces, as well as some members of the national media, there to cover the potential backlash surrounding his manager Ozzie Guillen. Chief among them, Paul Sullivan, Chicago Tribune reporter, whose favorite subjects include: Steve Bartman, the possibility of clubhouse turmoil, and himself. Just yesterday, Sullivan penned a piece hoping to coax some of the current Cubs into airing Zambrano out. It didn't turn out according to plan.

He had a lot of friends on this team. That's what people forget. You see his antics on the field, and the reasons he was suspended, and all the other b.s. But at the same time, you still have friends. He has guys he texts on this team, and he talks to on this team.

The Cubs are that enviable kid in high school who could get along with just about anyone.

From a personal standpoint, it's good to see old friends, and I'm hoping he's doing all right. Just trying to play ball right now, to be honest.

Soto is a little more concerned with raising his batting average above his playing weight.

He's a great pitcher, but we've got a lot of young talent here, and we're moving forward. I don't even think of him because he's not on the team.

What does Fonzie think about? That would have been a nice follow up question because we know the answer isn't baseball.

Whatever he did here, that's not my business. He's still my friend. I was never upset. I always said he was wrong (for the walk-out). He knows that, and everybody knows that...Hey, the guy was here for my six years here, and he's a real good guy. He's got problems. Everybody's got problems.

Carlos Zambrano has been tabbed for the role of "John Everyman" in MLB's morality play.

With that out of the way, Carlos knew he would have to answer for himself. One last time to make amends, at least until the Marlins visited Wrigley in July. Then he would would have to do this all over again. He harbored no resentment towards the franchise or any of his former teammates. He also reflected on all of his good memories with the Cubs and took full responsibility for his behavior.

I know that I made a mistake in Chicago - I made a lot of mistakes...I'm responsible for the things that happened in Chicago. Nobody else. It wasn't Jim Hendry. It wasn't the team. It was me. Carlos Zambrano.

The reporters, normally skeptical of Zambrano's sincerity, believed him this time. They saw a man who could finally breathe easy in a care-free city with very little expectations for him. "I'm cured," Zambrano famously proclaimed last year after undergoing a one-hour anger management class. This time for real.

With the questioning finished, Carlos suited up and headed out on to the field for some BP. He took some thundering left-handed hacks but had very little success. A lot of swing-and-misses, and a few slow dribblers down the first base line. Then something magical happened. On the last pitch of his session, Carlos connected right on the sweet spot. The sound of the ball off the bat caught everyone's attention. They all turned to watch the high, majestic drive. The ball hung in the air for what seemed like minutes. Every player on the field was reminded of the joy they felt after hitting their first Little League home run. Then the ball came down - ten feet short of the wall. Centerfield swallowed it up. Carlos could only laugh, and had a little fun with Paul Sullivan, who snapped this photo: 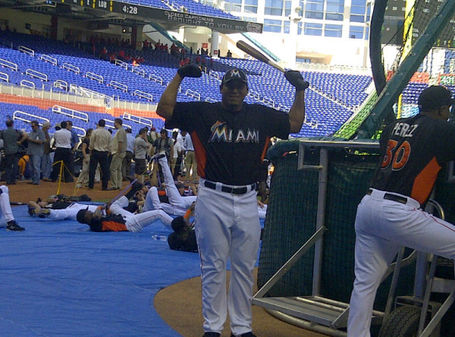 During the game, Carlos joked with Geovany Soto from the opposite dugout. No one knows exactly what went on, but their good-natured exchange appeared to include a version of the 'wanking' motion and the touching of Blake DeWitt's beard. Carlos watched as Josh Johnson worked his way out of innings with the double-play ball. Carlos's advice of "Put a man on for them, they won't know what to do with themselves," seemed to work well. When Hanley Ramirez hit his own majestic blast in the 8th, a three-run homer that easily clearing the centerfield wall, Carlos gleefully hopped around with first basemen Gaby Sanchez and his catcher John Buck. Never in a million years could he envision a scenario in which he would be forced to punch either of them in the face. In Miami, being a great teammate wasn't so hard.

Carlos stayed behind as the last person exited the clubhouse. He remained in full uniform and slipped on his batting gloves. His original intention was to throw on a black ski mask, but with his name on the back of his jersey, concealing his face would be of little use. Carlos picked out his favorite bat, "Woody," he called it. He made his way to an exact replica of the Billy Goat Tavern in downtown Miami. He knew this is where the vultures hung out, satisfied after a hardy meal. Where there is free-flowing amounts of alcohol, there is writers, or at least people pretending to be writers. The bouncer wanted to make a big commotion about Zambrano's appearance - announce it over the speaker and all that - but Carlos slipped a crisp $5 bill into his shirt pocket to keep him quiet.

The bouncer pointed down the stairs.

Carlos tip-toed down the stairs as quietly as possible for a 6'5, 270-pound human to tip-toe. He caught Sullivan with his back turned, drunkenly finishing off the recap to tomorrow night's game. Then he struck. Three straight home-run cuts, just like every at-bat in Chicago. He high-tailed it out of the bar as quietly as he came in, slipping an additional, even crisper, $1 bill into the bouncer's front pocket for good measure. 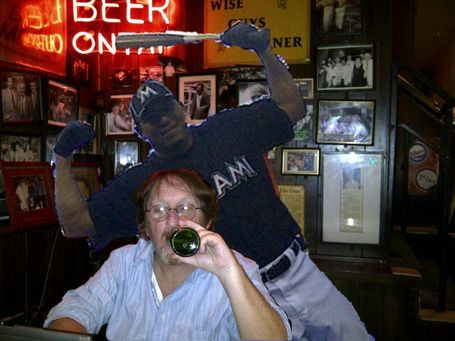 "I did a bad thing. I attacked a Chicago reporter."

"QOPIHFBAV; AQHRFUAU MVAHAAGJ!!!" [Shit! How can we explain away this one. Tell them you don't understand English.]

"I don't think that is going to work."

"QPOHIGB ANBFBAGUI VVOIAHWEBAH!" [What the hell where you even thinking? I thought you'd turned over a new leaf. I just guaranteed yesterday that you'd be no problem this year. Now I'm going to look like an idiot.]

"I just wanted to be a good teammate. I wanted to take some of the attention away from you for the Castro comments. I just...didn't think this all the way through."

"CMLKSKKF AOIFHAHD AVMAKDJFA AGNAFFJAK ANFAHDUHB ANFAJDF." [Attention? There is no attention on me. This is Miami. No one fusses about anything for more than a day here. They've moved on to other things like a new package of raw uncut cocaine and not caring about the Heat.]

"I know that I've made a mistake in Miami. I'm responsible for the things that happened in that replica of the Billy Goat Tavern. Nobody else. It wasn't you, Ozzie Guillen. It wasn't the team. It was me. Carlos Zambrano."

"ajfakhfinfna ahgahdahi wqyryeryi'gos nzbvzug;viajf afpok." [That's not bad. Now stay calm. There's an angle to be worked here. Tell them that someone threw you a pitch in the bar and you were swinging at it, and just as you came around, Paul Sullivan happened to stand up in front of you and you whacked him across the head three times. They'll believe that. Foolproof.]