Share All sharing options for: Marlon Byrd Struggles, New Tattoo is to Blame

Marlon Byrd has started the season 1-21 (.048) at the plate, including 0 for his last 19. His at-bats thus far have resembled a long walk up an escalator going down. Surely, there's a good reason for his struggles. Maybe a hitch in his swing, a depressed mental state, or being 34 years old? If Chicago sportswriters have taught me anything, it's to focus on a new, seemingly insignificant detail, and use it to explain away every bad happening.

So what's new with Marlon Byrd? He lost 40 pounds this offseason after finding out allergies to milk and wheat caused his weight to balloon. Considering he's never been much of a power hitter, a leaner, healthier body should be to his benefit. He also had a short novel tattooed across his right arm. Now that seems like the perfect, insignificant detail. The tattoo is a famous excerpt from Teddy Roosevelt's 1910 speech entitled "Citizenship in a Republic," often referred to as "The Man in the Arena" because of the well-known passage in question. You can read Roosevelt's speech in its entirety here, but don't waste your time. Here's all you need to know about Teddy Roosevelt: he was more of a MAN than you are, especially if you are a woman. He thought baseball to be "a mollycoddle game," which is the early 20th century way of calling something "soft." He didn't much respect baseball players and probably would have laughed in the face of Marlon Byrd - baseball player - for tattooing words onto himself he thought more applicable to football, lacrosse, or even tennis players. 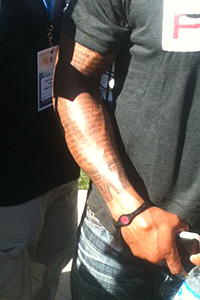 As you can see, Byrd's tattoo is rife with misunderstanding - both of Roosevelt and the quote itself. His early season struggles can be chalked up to a simple misreading of his own tattoo. What was supposed to be a source of inspiration is really just a daily dose of antiquated text, serving only to hamper his play. Below is a transcription of Byrd's tattoo, paired with descriptions of where he went wrong.

It is not the critic who counts; not the man who points out how the strong man stumbles, or where the doer of deeds could have done them better.

Rudy Jaramillo is not a critic, Marlon. He's your hitting coach and he's trying to help. You should listen to him.

The credit belongs to the man who is actually in the arena, whose face is marred by dust and sweat and blood;

Dust? Sweat? Blood? Sounds like you just crashed face first into the centerfield wall and tumbled onto the warning track again. Take it easy, man. That ball cleared the fence by at least 20 feet. Concussions hinder your focus at the plate.

who strives valiantly; who errs, who comes short again and again, because there is no effort without error or shortcoming;

Now that's just a load of shit. You can absolutely put forth an effort without failing. Don't feel you need to fail to prove you're trying. Please tell me that's not what you've been doing.

but who does actually strive to do the deeds; who knows great enthusiasms, the great devotions; who spends himself in a worthy cause;

Being a great teammate counts for very little on a bad team. There are many wonderful causes that I'm sure you're involved in. Playing centerfield for the Cubs is not one of them.

who at the best knows in the end the triumph of high achievement, and who at the worst, if he fails, at least fails while daring greatly,

Taking a 1-2 pitch on the outside corner for strike three with men on first and second, thereby killing your team's last chance at a tying run, hardly counts as daring.

so that his place shall never be with those cold and timid souls who neither know victory or defeat.

The NY Mets and Washington Nationals were both rumored to be interested in your services. Sure, plenty of cold and timid souls on those teams, but still a better situation than you're in now. You're stuck in Chicago. Hope that was your intention.