Spring Training has arrived! The Chicago Cubs have officially begun their post-winter camp in Arizona, and the team is now weeks away from playing Cactus League exhibition games at Hohokam Park in Mesa, Arizona.

Planning on joining the Cubs for a game or two this season? Well, be sure to know the layout of Phoenix and its outlying towns. Here is a map courtesy of CactusLeague.com: 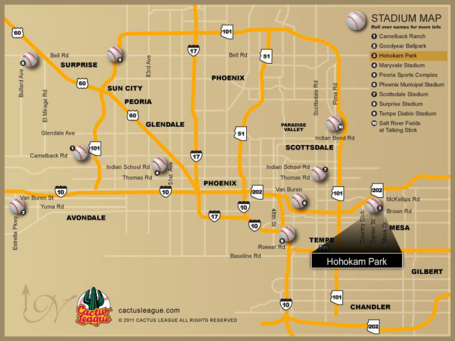 The Cubs start up their Hohokam games on Sunday, March 4, with a matchup against the Oakland Athletics. Ticket prices vary from $8 on the low end to $28 for premium games.

Some important tips for the curious game goers:

For more on the offseason, stay tuned to SB Nation Chicago. For more from around baseball, head over to Baseball Nation. To keep track of all rumors and happenings in the game, check out MLB Daily Dish.