The Chicago Cubs were bad in 2012. Things will get marginally better moving forward, primarily because of who Theo Epstein & Co. will try to sign this offseason to fill in the gaping holes in the rotation.

Share All sharing options for: Cubs free agency: 5 pitchers the North Siders may pursue this offseason

Do not expect the Chicago Cubs to be in the running for top pitching free agents Zack Greinke, Anibal Sanchez or Kyle Lohse. (Also: Edwin Jackson. But he is kind of a hard to predict considering his one year deal last year and subsequent firing of agent Scott Boras.) All of them will either be too costly or demand long-term deals that make, particularly for Lohse, age a concern. However, do expect these names: Scott Baker, Dan Haren, Ryan Dempster, Shaun Marcum and Brandon McCarthy.

The Cubs need to bolster a rotation featuring Jeff Samardzija, the injured Matt Garza and the soft-tossing, record-home-run-allowing Travis Wood. Lets just say Chicago's staff is not exactly deep. Chicago will aggressively attack pitchers who are looking to rebound from injury -- all but Dempster in this scenario count, but he is a special case anyway -- and increase their value for future contracts. Theo Epstein and Jed Hoyer will fill this need with low to medium-cost, high reward type signings. This could mean one of the aforementioned pitcher coming back into form, then locking him into a longer deal, or simply trading said pitcher for younger, controllable assets. Lets take a close look.

Scott Baker: Fresh off April Tommy John surgery, Baker is still a question mark for early 2013. However, in 2011, the former Twin was breaking out with a 3.14 ERA (3.45 FIP) and 4-to-1 K-to-BB ratio. He is currently rumored to end up back in Minnesota, but the Cubs could make a strong push for the 31-year old on a one year guaranteed deal with incentives and a possible team option.

Buyer beware: Baker has only started 30 games and pitched (exactly) 200 innings once in his career.

Dan Haren: So, that Dan Haren for Carlos Marmol deal didn't quite come to fruition. I wouldn't, however, completely dismiss the Cubs from pursuing him via free agency. $15.5 million was a lot to take in -- so was the $3.5 million buyout. However, Haren is only a season away from a 16-10 record, 238+ innings pitched, a K-to-BB ratio of nearly 6-to-1 and a WAR of 4.0. Some team may go overboard on the former Angel, but if not, the Cubs could sweep in and get value out of the 32 year old.

Buyer beware: Some have suggested a back injury is to blame for last year's struggles, but maybe also this trend: 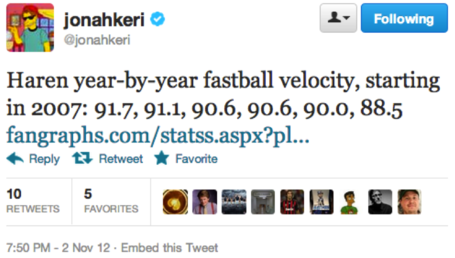 Ryan Dempster: The only reason Dempster would sign with the Cubs is to be with his family. His daughter's illness and his family-first personality may eventually mean a return stay in Chicago. (Some are predicting he'll end up in Milwaukee for similar reasons.) The Canadian is a bit of a wild card, but I expect him to sign for two years and something around $10-12 million per to be close to his family, but if he chooses to hit the open market, he could probably get a better deal.

Buyer beware: He's 35 and posted a 5.09 ERA in Texas in 12 starts after being traded at the deadline.

Shaun Marcum: Coming off a season shortened by elbow soreness, Marcum still produced an ERA of 3.70. (His worst since 2007.) The former Brewer will definitely have a market, it just depends on how risk adverse teams will be on the soft tossing righty. He's been good for a few years now and will have value either on the Cubs or on the trading block, depending on whether Theo and Jed see Marcum in their long-term plans. It just depends on how much money and years they are willing to invest.

Brandon McCarthy: If math saved a sports person, it would be McCarthy. After learning about nerd stuff, the former Athletic changed his approach to pitching. Looking to induce more ground balls and strike outs, while lowering his walk and fly ball rates, McCarthy switched to a sinker and cutter, drastically reducing the bad and increasing the good. He led the AL in FIP (2.86) in 2011, and was putting together another strong year in 2012, until a line drive crashed into his skull, fracturing it. McCarthy should be ready to go for spring training, but his value on the open market is still something of a question mark. I would love to see the Cubs go after the still only 29 year old and lock him down. He could be a very reliable pitcher -- or trade chip -- if the Cubs are looking to compete in 2014 or 2015.

Buyer beware: He will make you laugh on twitter.