Share All sharing options for: Jim Hendry Out As Cubs General Manager 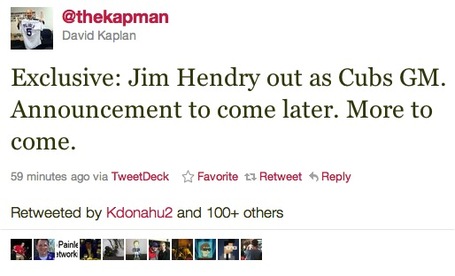 As always, MLBTR hit us with the juicy stuff.

The Cubs won three division titles under Hendry (2003, '07, '08), but they're currently 54-70, 19 games out of first place in the NL Central despite an Opening Day payroll of roughly $134MM. The 56-year-old departs as the third-longest tenured GM in the National League, behind Brian Sabean of the Giants and Dan O'Dowd of the Rockies. Over the course of Hendry's tenure, the Cubs were 749-748, one game above .500.

Owner, Tom Ricketts, seems ready to move on and put his own name on the Cubs future.

"It is time for a fresh approach in our baseball leadership and our search begins immediately for our next general manager," Ricketts said.

Cubs assistant GM, Dave Randy Bush, will take over on an interim basis.

More to come as this story develops.