Outside of the millions upon millions of dollars and hoards of questionably legal girls chasing after them, everything I understand about the Jonas Brothers really really makes me not want to be a Jonas Brother. From the promise rings to being engaged at 21 to their hair, being a Jonas Brother sounds awful.

Then, today, Nick Jonas -- the front man of Disney's version of Three (Adorable) Blind Mice -- got to hit batting practice at Wrigley Field. Maybe I'm wrong(?) A pic of the death of "the American man" following the jump. 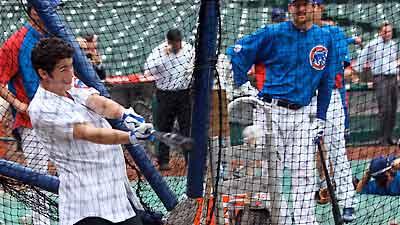