Share All sharing options for: 'F**ck The Goat,' Indeed

The Cubs have curses in the name of billy goats and black cats -- and maybe a man in glasses and headphones. They were told no team could win without lights. So they got those. Try as they might, though, it seems nothing is shaking the Cubs free of losing.

Players always talk about how these things -- curses and the like -- don't affect them at all and are simply fodder for the, lets say, imaginative. It's true, why would a decision to not let some dude and goat into a World Series game in 1945 have any singular affect on the outcome of an at-bat in 2011? It really doesn't make much sense.

But neither does ignoring it completely. So the Cubs made a joke of it in the form of a t-shirt. Picture following the jump. 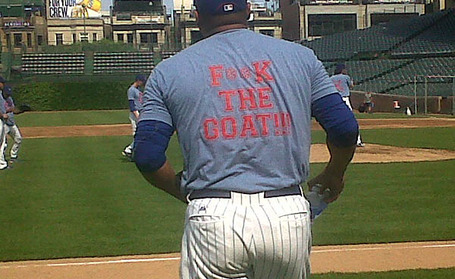 First, "F**CK The Goat" would be a totally awesome band name.

"I think it's just kind of a loose, fun saying that came up, and it was funny as hell, and now we have T-shirts. Basically, that's all it was. It was an awesome joke. Everyone laughed. And now I have an extra large on."

Look for "F**CK Bartman" and "F**CK Black Cats" coming out in the fall. Women's line by Alyssa Milano.