Adidas threw a party in Chicago on Thursday to unveil Derrick Rose's new apparel line. SB Nation Chicago's Ricky O'Donnell was there to take it all in.

Chicago Illuminating Company is tucked away just south of the Loop and approximately three baseball throws away from Chinatown on city's near-South Side. It isn't exactly hard to find, at least not when it's marked by adidas flags and men as large as wookies in all black suits protecting the perimeter. On Thursday afternoon, the spot might as well have been the epicenter of the Chicago basketball scene. No, there wasn't a ball bounced or a jumper hoisted, but fallen Bulls superstar Derrick Rose was very much in the house. His mere presence is likely enough to meet the criteria during these hoops-starved September days.

Rose was the man of the hour in an elaborate adidas production showcasing his new signature apparel line for his chief endorser. Derrick Rose wasn't only speaking candidly on-stage, he also hung on the walls, played on the television screens and was name-dropped in the accompanying hip-hop music blaring through the building.

There's really no way of overstating just how ubiquitous D. Rose's image was at an event like this. Adidas has a good one, and they know it. A video mashup of his commercials and top highlights played while a DJ spun cuts off "Cruel Summer" at uncomfortably high decibel levels. People drank complementary bottles of SmartWater as the speakers repeated "your chick, she's so thirsty". B.J. Armstrong held a door open for me. I talked to Derrick's brother Reggie and nearly bumped into his mom Brenda by accident. Derrick has always spoke to the importance of those who raised and protected him, and would at this event, but his frantic travel and rehab schedule almost makes you wonder if this is what counts as a Rose family reunion this time of year. If so, at least they did it big. 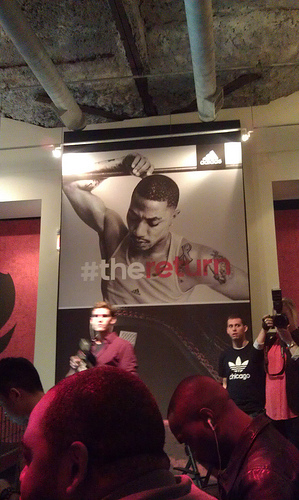 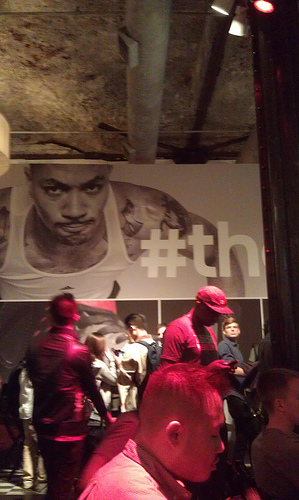 There's no cheering in the press box, of course, but it's hard to resist the magnetism and charm of Rose. He is very much a Grade-A celebrity in this town, though I can't imagine anyone of his stature coming off as likable. As he talked about his shoes, the company and his rehabilitation, I found myself rooting him for to speak eloquently and not trip over his own words. He nailed it, by and large. While the equally relevant Jay Cutler flicks off cameras from a variety of angles and treats dealing with the press like doing homework, Rose doesn't at all seem uncomfortable in a setting like the one on Thursday. It's clear he realizes how fortunate he is to be blessed with such otherworldly athletic gifts, and his much talked about humbleness is nothing if not authentic. If it is indeed an act, he's doing a damn fine job of keeping up the charade.

Rose was joined on stage by two men, a designer who resembled Dr. Tobias Funke and the VP of adidas basketball who had the posture of man worth more money than everyone reading this story combined. They lobbed softball questions at Derrick as he spoke about his new clothing line and not much else. I don't think the Bulls were mentioned more than once during the 40 minute event, though Rose did touch upon his rehab in Los Angeles. Spoiler alert: Derrick Rose says he's getting stronger everyday and just wants to win a championship. Front page stuff, right there.

It didn't take long for my favorite moment to unfurl. It came from what I believe was the first question of the event. The VP, Lawrence Norman, asked Rose about his commercial shoot with Ken Jeong, the guy who plays Professor Chang on "Community". This is, even without a response, a hilarious initial question. Rose, straight-faced, looked out at the audience and said: "It was cool. A new experience. That was my first time ever working with an actor. But he was so much more than an actor."

And that was, without question, the highlight of my week.

Events as overwhelmingly corporate as this one can come off as inhumane, but leave it to Derrick Rose, sports' most genuine superstar, to kick-start the emotions and turn on the water works. As a video of the new logo played midway through the event, Derrick dropped his head in his hands and started crying. I captured it on video:

Rose can run like the wind and jump out the building, but this singular moment, as much as anything else, is the reason he's so adored. Could you imagine Cutler being so raw? Even other NBA stars like Russell Westbrook, Chris Paul or Deron Williams? Of course not. Rose couldn't hold back his emotions as he spoke to his rough upbringing in the South Side neighborhood of Englewood, the cite of so much violence during Chicago's summer of blood. Rose continued: "I could have easily went down that other road like some of the people in my neighborhood." 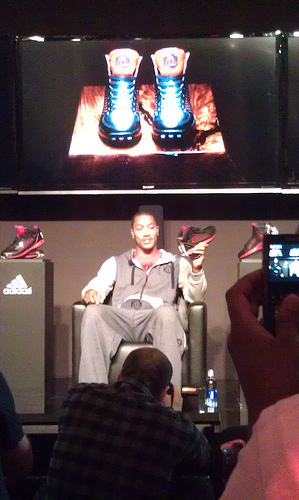 1. As Lawrence the VP talked about the logo, he mentioned everything that went into it. Rose's name, number, family and city. He then turned his attention to Murray Park, the Englewood court Rose spent so much time on growing up.

"I've never played there. I know a lot of you have.

From what I hear, it's not easy. The logo incorporates Murray Park because the edges and angles are rough. Not refined. It represents the style of play at Murray Park."

Then Lawrence the VP asked Derrick about the main difference between playing in the NBA and playing at Murray Park:

Rose should have stopped right there, but he continued:

"For real though, at the park it's way more just pure, raw basketball. You don't know everybody's skill. Someone can just walk up and play. You're just trying to earn everyone's respect on the court. That's what Chicago basketball is all about."

2. When asked to speak on Chicago's inherent style, Rose said:

"We pick what high school we go to just because of the uniforms."

Rahm could really use that as a bargaining chip right now.

3. The adidas team took a trip with Rose back to his native Englewood during the logo's design process. They went to Murray Park, they went to Simeon High School, and then, the Funke lookalike noted, they got hungry. Derrick took 'em to Rainbow Submarine, where there's a special or two named after him.

"There's a lot of specials. I got so many burgers and other food named after me."

4. Rose, speaking on the resolve of his mother:

"My mom does everything in the house. Putting up lights. Mopping the floor. Washing dishes. Things men should do, she's doing at 5-foot-2."

5. Immediately following Rose's tears, Lawrence the VP introduced a "local kid who follows everything you do. Who roots you on. Who's inspired by you. Who even started a Derrick Rose webpage."

I attempted to tweet that I thought they were going to call me to the stage, but my crappy cell phone service never sent it out. NO WORRIES. Blog-a-Bull would later make the exact same joke.

So the kid comes up on stage. D. Rose jersey. D. Rose shoes. He is quiet and doesn't really know what to say. Neither does Derrick. Both are mic'd up.

Rose: "Ah, way out there in Des Plaines."

Just an amazing exchange. Safe to say this kid has never played at Murray Park, either.

Finally: Many, many thanks to the good people at adidas, who hooked it up big time. Good times.