You know, in a vacuum, every move the Chicago Bulls made this offseason can probably be defended. Kirk Hinrich isn't a bad signing for the mini mid-level exception, even if he ended up getting a bit more than that. There's a reason the market for Marco Belinelli was small enough to allow the Bulls to sign the shooting guard for the bi-annual exception (just $1.9 million per season), though his impressive three-point shooting numbers and the bargain-basement cost makes him an acceptable short-term replacement for Kyle Korver. Vladimir Radmanovic is tall, experienced and can shoot the rock a bit. He isn't much of an NBA player, but you can probably do worse for the veteran's minimum. Letting go of Omer Asik to sign Nazr Mohammed is certainly a bummer, though there isn't a Bulls fan alive who thought Asik was the worth the offer sheet he was signed to by the Houston Rockets.

All of these things can be argued by a less cynical and less informed observer of the team. If you've been keeping it locked to SB Nation Chicago lately, you probably know I'm not a huge fan of what the Bulls have done this summer. Ownership's consistent refusal to commit financially to the NBA's most profitable team is completely deplorable. They made zero attempt at getting better this offseason when they had assets to make some moves. Their 2014 plan sucks. Making Hinrich the top offseason priority might be worst of all. I think the Bulls did a terrible job this offseason and they deserve to be criticized for it. But even if you're the type of fan who will never say a bad thing about your favorite team, yesterday's move may have put you closer to my ledge.

The Bulls signed guard Nate Robinson on Monday. In a vacuum? Man, I'd probably rather have him than John Lucas III. But also: Nate Robinson? Dammit. Now the Bulls are just messing with us.

The "Robinson saga" -- if you'd like to call it that -- was kind of funny. The diminutive guard apparently told some random kids at a breakfast joint he was signing with the Bulls, which said kids subsequently tweeted. A few less-than-credible sources ran with the report. Some of us were hesitant to go with it at first, though I'd like to think we all knew it was true.

Of course the Bulls would sign Nate Robinson. It is perfectly in line with everything they have done this offseason. This is just another move that amounts to strangling every last breath out of the fanbase's collective will to cheer.

Nate Robinson is a clown. He is a 5-foot-8 gunner who has a reputationcan't handle the ball, can't pass, can't defend. He will score, though not efficiently. He is loud and obnoxious and could certainly be argued as the league's most annoying player. He actually played quite well in 51 games with the Golden State Warriors last season, averaging 11.2 points and a career-high 4.5 assists per game in 51 contests while posting an impressive 18.05 PER.

But still. This is Nate Robinson we're talking about. The same guy who took approximately 18 million tries to become a three-time dunk contest champion. The same guy who was friends with "Big Baby" before his TBJ cameo. He has very few redeemable qualities as a basketball player, but he is cheap, which is all that concerns the Chicago Bulls.

Robinson tweeted a Photoshopped picture of himself in a Bulls jersey on Tuesday. 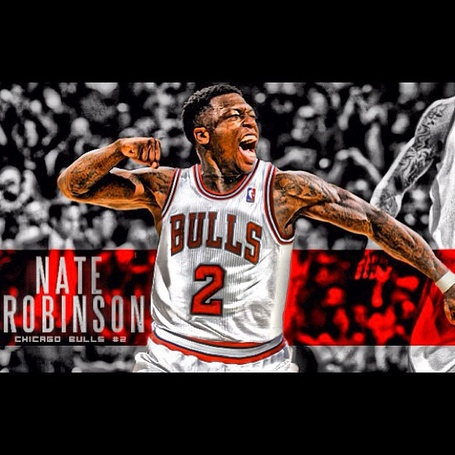 And there you go, Chicago. I think we all know Tom Thibodeau will coach this team to more wins than they deserve, but that doesn't mean the offseason was a success. It was a failure. Nate Robinson personifies everything.