Share All sharing options for: President Obama Gets Rejected By First Lady During Kiss-Cam; Aggressively Rocks PDA In Second-Half

There's nothing like getting locked out in public by a lady. You slowly move in to get a slow, soft, possibly wet, kiss, only to get the hand, the cheek or the shoulder, pushing you away and your ego even lower. It's like the anti-little blue pill. Well, this is probably* double when you're the President of the United States (the person, not the band) and you're under the scrutiny of The Free World.

President Obama was enjoying a little USA Basketball with the First Lady when the devils in charge of the "Kiss-Cam" put the couple on the JumboTron. It did not go well.

The Obamas were shown cuddling on the Jumbotron during the first half, but when the "Kiss-Cam" promotional display came up, the President missed it. The audience then booed when the First Lady wouldn't kiss the president, WHO appeared to lean in for a kiss to please the crowd.

Don't fear, Obama eventually got his. Picture and an explanation following the jump.

*I assume. I've never been president. Yet.

In the fourth quarter, Obama got his shot at redemption as the couple shared a crowd-pleasing kiss to alleviate the first-half fail. 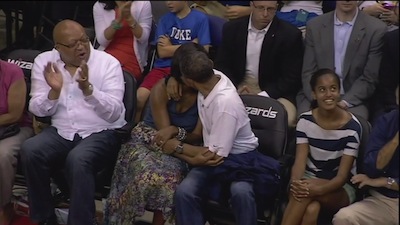