Height, weight, wingspan and standing reach measurements have been released for all of the 2012 NBA Draft Combine participants. If you need a 2012 NBA Draft quick fix, take a look at how some prospects stack up.

The 2012 NBA Draft Combine in Chicago is an important place for prospects to show how they stack up against other NBA hopefuls in the presence of countless general managers, coaches and scouts, but there are certain meaningful things that are (somewhat) out of each player's control, too. On Friday morning, the NBA released information on the height, weight, wingspan and standing reach of all Draft Combine attendees. Some measurements confirmed visual impressions -- Andre Drummond is an amazing physical specimen -- while other players didn't quite match up with the vitals posted in their college media guides (Jeremy Lamb and Austin Rivers are only separated by one half an inch in height).

In the true NBA Draft spirit of over-analysis and hyper-sensitivity to details of dubious predictive value, I have compiled a breakdown of the player measurements against historical positional averages. I am a Milwaukee Bucks guy, so I chose a collection of mid-to-late lottery prospects including: Kendall Marshall, Austin Rivers, Jeremy Lamb, Terrence Ross, Perry Jones III, Terrence Jones, Jared Sullinger, John Henson, Andre Drummond, Meyers Leonard and Tyler Zeller.

As a primer for these results, I should mention that Frank Madden of Brew Hoop did an excellent draft piece on the volatility of measurements a long time ago. He suggested these numbers cannot always be considered the absolute truth. In fact, Marquette G/F Jae Crowder measured 1.25 inches taller at the 2012 Draft Combine than he did during the Nets' workout roughly one week ago, but he also somehow lost 3.75 inches in his standing reach. If that seems odd to you, I can confirm you are indeed a living person.

The main takeaway from Madden's article is that sometimes players may actively influence their measurements using improper posture and other subtle techniques in order to gain an advantage in skill measurements.

...vertical leaps are typically calculated based on the difference between max (jumping) reach and standing reach.

Thus, a player can to some extent manipulate their measurements--if they want a more impressive vertical then they can tank their standing reach, though obviously it's a tradeoff. Guards may find it particularly beneficial to inflate their verticals at the expense of standing reach, which is probably not scrutinized nearly as closely by teams. Similarly, players with reputations for being un-athletic could see value in inflating their verticals to combat those opinions--Kevin Love's 37" max vert looks rather fishy in that light.

See how things can get a bit dodgy? At this point you might say "if that's the case, why should I care about measurements at all?" It's a perfectly reasonable question, and I'm unsure if any meaningful trends exist with regards to this data in terms of over/under-performance in the NBA based on draft position.

However, we all know that GMs and scouts take a look at the information and use it in some way to inform their ultimate decision on which player to select in the NBA Draft. That will be the case again this season. The data is often a fundamental signal of whether a given player is endowed to physically compete against NBA talent at a high level. Premium physical tools certainly matter when it comes to changing vectors on drives, shutting down angles at the rim and getting off clean looks at the hoop -- anyone who watch the Thunder vs. Spurs series can attest to this fact.

One thing I've noticed over the years is NBA talent evaluators tend to incorporate the measurements into their analysis as a means of eventually broaching the subject of overall production. Anyone who fits the prototype has less of an excuse for failing to dominate. If blessed with the tools to physically compete, poor numbers often turn into concerns about motor, character, work habits, aggressiveness and skill level. Those are the tools needed to mentally compete against players in the NBA. Upside always lingers as a competing factor, but guys who measure well are often scrutinized more closely and given less credit for work ethic and will-to-win type traits. In contrast, the plucky undersized prospects who produce in college are routinely labeled as on-court leaders, fierce competitors and smart players.

Is that an oversimplification? Definitely. Is it probably wrong as well? I wouldn't doubt it for a second. In any case, if you have managed to retain any interest in measurements for the NBA Draft lottery prospects I listed above, here is some rudimentary analysis based on the recorded values in comparison to historical positional averages via Draft Express. 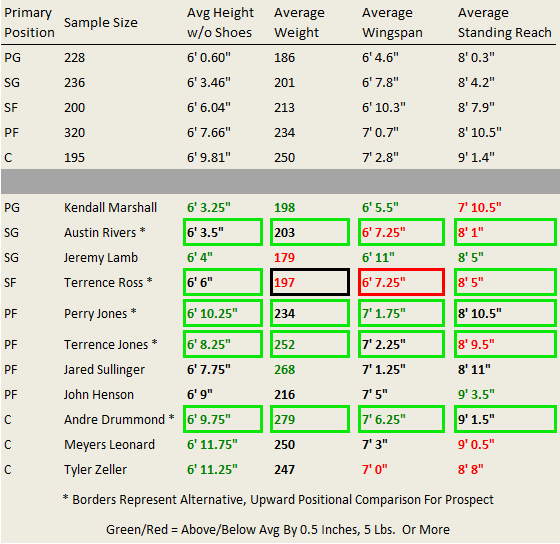 Here is a link to the rest of the official list (via Draft Express). In terms of similar measurements for players across the last 20 years, here are the some notable and recognizable comparisons I plucked while scouring the Draft Express database:

The comparisons I just listed probably don't mean anything, but I chose drafted players you may have seen play and can visualize in your mind just so the numbers gain a bit of context in relation to how they would look on an NBA court.

If you generally have no idea what to do with these numbers but still plan to file them away somewhere in the deep recesses of your brain for reasons unknown, I stand in solidarity with you.