The 2012 NBA Mock Draft scene is fun, but the NBA Draft Top-100 prospect ranking landscape provides the pure player analysis we all really crave. It's strange that more fans pay attention to mock drafts than prospect rankings. The idea of a mock draft is merely to project what teams are most likely to do on draft day if they keep their pick(s), but that doesn't necessarily provide any useful commentary on whether the projected selections are prudent decisions under the circumstances. Typically, the true draft analysis comes on the back end of a bifurcated process in the form of draft grades, issued ex post facto and rarely (if ever) revisited down the line. I've covered mock drafts like crazy, but there is definitely more pertinent draft information to digest in other places.

This is where the Top-100 Big Board rankings on ESPN (Chad Ford) and Draft Express (Jonathan Givony) come into play. Where mocks merely seek to project the behavior of teams, prospect rankings provide insight on the potential and value of the actual players. That's what we all really want to know as the 2012 NBA Draft approaches: which players in the draft class are expected to become the best professionals down the line. Some of the most recent trends on ESPN and DX took me completely by surprise.

Recap of Top-100 NBA Draft Prospect Rankings From May

In my May update on NBA Draft Prospect Rankings, Syracuse guard Dion Waiters created the biggest disagreement between ESPN and Draft Express. Chad Ford latched onto Waiters' superstar potential, loosely calling him a Tyreke Evans-level talent after running a story with an anonymous GM using Dwyane Wade as a comparison. Waiters jumped from No. 15 to No. 8 on the Big Board shortly after that piece, but Givony disregarded the D-Wade talk -- calling it "lazy and ridiculous" -- and left Waiters at No. 19 on the DX Top-100.

Jonathan Givony and his staff and Draft Express have been scouting UConn guard Jeremy Lamb and Baylor forward Perry Jones III for more than a year, and I consider their site the best free resource for NBA Draft scouting, so that's what makes the abrupt downward trends for the stock of Lamb and Jones III on DX supremely fascinating.

You wouldn't be able to tell much from the June 25 mock draft on DX -- Lamb goes No. 8 overall (Toronto Raptors) and Jones III comes off the board at No. 19 (Orlando Magic) -- but the Top-100 rankings tell a very clear story. Here is a quick summary of the trends for both players:

A slight drop would potentially mean a few other prospects just worked out well and impressed teams, but the stark fall for both players in this case raises bigger issues. Something went seriously wrong for these guys during the combine and/or the team workouts.

Lamb sprained his ankle during a workout for the Toronto Raptors on June 14 and hasn't done much since then, but perhaps the biggest questions are still about his motor and competitive edge. Yawning during his lackluster combine interview with media probably didn't help allay any fears in that regard. In the Jeremy Lamb Video Scouting Report (by Mike Schmitz of Draft Express) listed weaknesses include his lack of strength and reliance on an inconsistent perimeter jumpshot:

Although the specific reasons for his drop on DX are unknown to me, this caveat from their trending prospects article from March 22 is the lens through which I choose to understand their decision:

His team's lack of success, poor on-court chemistry and his often apathetic demeanor will likely be concerns that NBA teams will want to further investigate in the pre-draft process, but he's shown tremendous growth as a player after barely being a top 100 recruit out of high school.

As for Perry Jones, he has worked out head-to-head against guys like Terrence Jones and John Henson, but hasn't exactly come out on top in any of those scenarios. PJIII is an elite athlete and his trainer believes the questions about motor are rooted in a correctable flaw in his movement patterns (he may put too much pressure on his knees to consistently produce his peak explosiveness). Freakish measurements and unique excuses aside, the real issue is his completely underwhelming production at Baylor. Despite the size and speed to constantly create mismatches in theory, Jones rarely makes much of his physical advantages on the court, as Joseph Treutlein of Draft Express explains:

Perry Jones is the highest ranked prospect in this weak forward group, but looks average at best overall from a statistical perspective...

...Jones' problems creating his own shot are more concerning, as despite his intriguing flashes, his efficiency in isolation and post-up situations are very poor. His 0.654 PPP on isolations ranks 4th worst, while his 0.795 PPP on post ups ranks second worst overall, and dead last among NCAA players.

The extra layer of intrigue comes from the fact that Chad Ford disagrees strongly with Givony on both Lamb and Jones. He still holds each player in high esteem, as Lamb is No. 9 on his Top-100 and Jones is No. 11 overall. Here is a way to frame the gravity of the divergence in your mind: can you name the No. 22 and No. 24 ranked prospects from any prior draft class? A top-10 ranking likely signifies a big difference in perceived value, unless this is the deepest and most productive NBA Draft class of all-time.

The subtle message here is that the DX scouting staff believes some NBA GM is primed to make a big mistake by drafting Lamb in the top-10. Chad Ford does not agree. On the flip side, Ford may think PJIII is a steal in the late teens and early 20s, but the DX crew has that range even a bit high for his value as a prospect.

Meyers Leonard is the only player in this trio to receive a Green Room invite from the NBA for Draft night (an invitation essentially suggests the player will be selected in the first 15 picks), so that makes the separation between the rankings on ESPN and Draft Express especially interesting.

The basic thing to know regarding Leonard is that he has reportedly wowed teams during workouts more that he did with his game film, so the split here is all about how much weight is applied to workout performances and the projection of prototypical NBA tools. ESPN moved Leonard from outside the top-20 prospects during the pre-combine phase to his current spot at No. 10 overall. This is the biggest jump of any player on Ford's board. As for DX, Leonard started at No. 15 pre-combine and has slipped to No. 25 overall. If you want more on Leonard's rise, I've previously covered the situation pretty thoroughly.

The deal with Sullinger hinges on how each site feels regarding his reported medical red-flag that emerged during the NBA Combine. If you need a refresher, I explained the situation in detail in my latest Meta-Mock Draft Analysis post:

Ohio State big man Jared Sullinger had ranked among the top-10 prospects in the 2012 NBA Draft class for the entire NCAA season and well into the NBA Playoffs, but that all changed on June 18, 2012. In actuality, things may have truly changed during the NBA Draft Combine, where ESPN's Chad Ford is saying a number of NBA team doctors slapped a red flag on Sullinger due to concerns about his back. Sullinger's father has tried to calm the waters by claiming the issue has more to do with tight hamstrings and quads than the back, and that it shouldn't be considered a long-term problem, but that hasn't stopped his son's stock from dropping hard. Sullinger's agent (David Falk) spoke with Sam Amick of SI.com about the health of his client's back as well...

Ford consequently dropped Sullinger from No. 10 to No. 17. Givony moved him up from No. 7 to No. 6 and offered this reminder to anyone thinking the medical red-flag is an unexpected revelation:

This Sullinger thing isn't a new thing. Its been floating around since Treviso. He's not the only lottery prospect that was red-flagged.

For a look at the spread on Kendall Marshall's ranking and the trends that have developed during the 2012 NBA Draft process, take a look at the charts I created below: 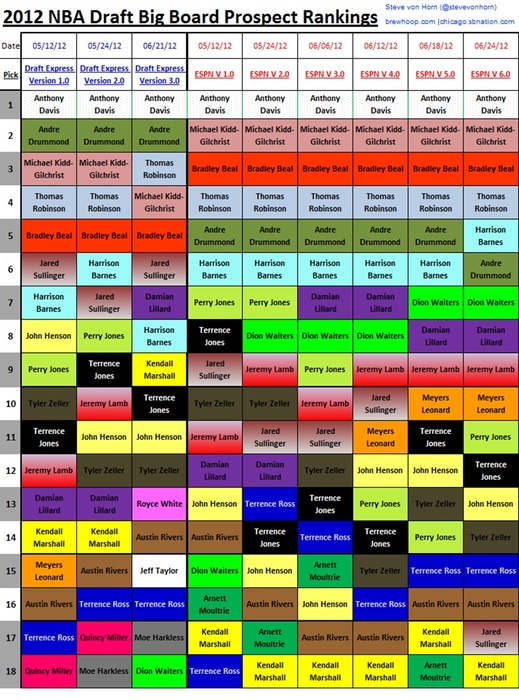 For the final summary chart, you need to know the following things: (1) Overall High/Low Rankings are derived from all possible prospect rankings across each version of the top-100 on both sites (all nine iterations charted above), (2) Draft Stock Change DX/ESPN represent the spread between the initial pre-combine rankings (May 12 version) and the most recent hierarchy for each outlet, (3) Avg Current Ranking is merely the average between the most recent prospect rankings for DX and ESPN, and (4) Mock Draft Composite Rankings are the average draft position from the seven different mocks I recently analyzed in my Meta-Mock Draft Analysis feature. 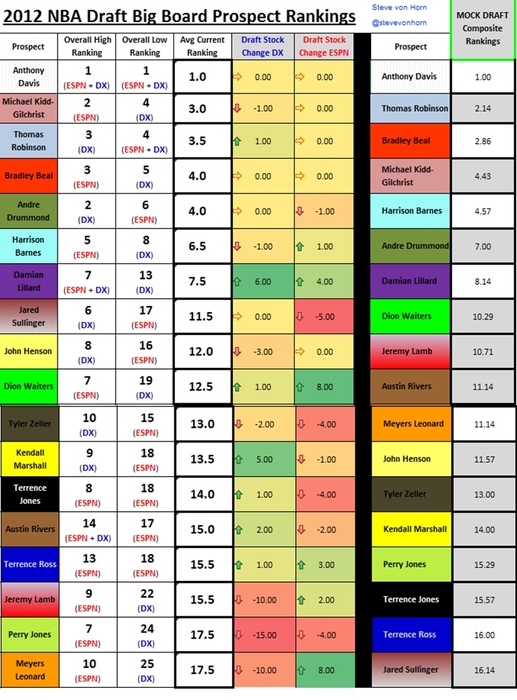