Steve von Horn of SB Nation Chicago is back with more 2012 NBA Mock Draft Analysis. In this version, Jared Sullinger takes a dive while Austin Rivers moves up in the composite rankings.

As with Vol. 1 and Vol. 2 of my 2012 NBA Mock Draft Meta-Analysis feature, I have compiled the latest mock drafts from around the internet (post-Wizards/Hornets trade versions) to break down the draft stock of the top prospects by building consensus and comparing differences directly. Take a look at how workouts and draft rumors have affected the projected ranges for Jared Sullinger, Austin Rivers, Bradley Beal, Thomas Robinson, Dion Waiters and more. 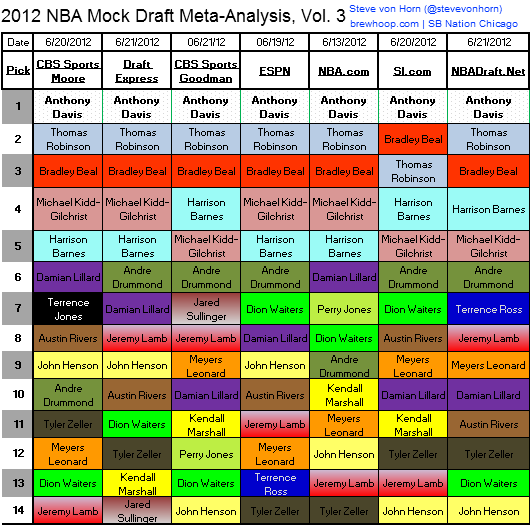 Ohio State big man Jared Sullinger had ranked among the top-10 prospects in the 2012 NBA Draft class for the entire NCAA season and well into the NBA Playoffs, but that all changed on June 18, 2012. In actuallity, things may have truly changed during the NBA Draft Combine, where ESPN's Chad Ford is saying a number of NBA team doctors slapped a red flag on Sullinger due to concerns about his back. Sullinger's father has tried to calm the waters by claiming the issue has more to do with tight hamstrings and quads than the back, and that it shouldn't be considered a long-term problem, but that hasn't stopped his son's stock from dropping hard. Sullinger's agent (David Falk) spoke with Sam Amick of SI.com about the health of his client's back as well:

"Jared has consulted with one of the foremost specialists of backs and spines, who has vast experience treating professional athletes. He has explained to us that Jared had extremely tight hamstrings that became tight because he had suffered an injury that I don't think he was aware of to his hamstring. He needs to maintain vigilance with his flexibility. And if he does that, and keeps his weight at an appropriate level, then he should have absolutely no problems over the next 15 years."

Prior to the NBA Combine, Sullinger clocked in at No. 7 in the composite rankings (every mock except NBADraft.net had him going either sixth or seventh overall). After the combine he slipped to No. 9, thanks to a few so-so measurements. In the wake of being red-flagged he has plummeted to No. 18 overall -- a fall larger than every other top prospect drop combined for Vol. 3 -- and is projected to land in the lottery by only two of the seven selected mock drafters

The caveat here is that mocks are intended to predict the order of selection, not necessarily to represent the true rankings of prospects according to skill. It is important to note that Sullinger still ranks No. 6 on the Draft Express big board and No. 17 on Chad Ford's Top 100 at ESPN, thanks to his impressive production in college and high skill level.

Duke guard Austin Rivers has followed a far more optimistic trend in the mocks. After failing to get any higher than No. 11 in pre-combine projections, Rivers tested out well and reportedly received a promise from a lottery team (note: Chad Ford is saying he does not have any such promise). Those developments failed to immediately boost his stock, but since then he has only worked out for teams in the No. 3 to No. 11 range -- the Portland Trail Blazers, Washington Wizards and Cleveland Cavaliers. He could go anywhere from 8-15 at this point (according to my selected mocks), but his composite score has jumped from a fringe late-lottery prospect to the No. 10 player on the board. A divisive players like John Henson, Meyers Leonard, Tyler Zeller or Terrence Jones could still disrupt his hold on a top-10 spot, but for now Rivers had made the rise he hoped to heading into the draft.

However, he struggled in the "7 Drill" during his workout with the Wizards -- it's a shooting drill where you must make seven elbow jumpshots in a row to end the drill, but for each miss another required made shot is added to the total threshold -- so if teams in the top 10 had issues with him, those things may linger until draft day. Here is a video of Rivers during the "7 Drill," via BulletsForever.com.

Speaking of the Washington Wizards, they recently consummated a trade with the New Orleans Hornets in which Trevor Ariza and Emeka Okafor were shipped to the nation's capital in exchange for Rashard Lewis and the No. 46 overall pick. Most prognosticators think the addition of a veteran SF and a proven PF/C takes Michael Kidd-Gilchrist and Thomas Robinson out of consideration at No. 3, so naturally Bradley Beal fits as a logical pick to slide in next to John Wall at SG. At this point none of the mock draft experts are bold enough to put Beal any lower than the third pick, so he jumped MKG in the composite rankings as a result.

Thanks to the work of agents for the potential top five players, MKG, Robinson and Beal have all only worked out for the Charlotte Bobcats, Washington Wizards and Cleveland Cavaliers (Harrison Barnes has hit that trio but also worked out for the Toronto Raptors). The Sacramento Kings have been left to pick up the pieces at No. 5, apparently. Andre Drummond is really the only other player that could break apart the quartet I listed after No. 1 pick Anthony Davis, but don't count on it. This comes from ESPN's Chad Ford, but only because I couldn't find the report from Sam Amick he cites:

I've heard [Drummond] had strong workouts in Sacramento and Portland, and I've also heard that the Wizards and Cavs workouts weren't as strong. Sports Illustrated's Sam Amick reported that Robinson destroyed Drummond in the Cavs workout. I haven't heard it described that strongly, but I do think Robinson was considerably more aggressive, and thus much better. Given the age difference, experience gap and different styles, you could expect that, however. 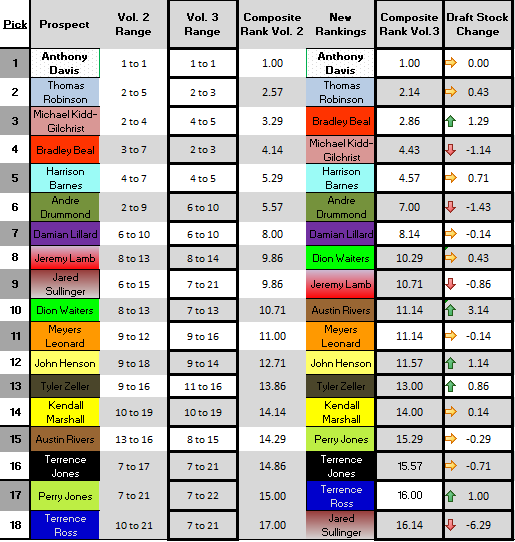 If you prefer to also visualize the change over time in the lottery picks, here is a quick GIF file of the three versions of meta-analysis I have put together so far: