Steve von Horn is back with Vol. 2 of his 2012 NBA Mock Draft Feature. Get yourself prepared for the NBA Draft by following along with some next-level analysis of the potential lottery picks.

The 2012 NBA Draft Combine in Chicago (June 6-10) produced a gaggle of raw data on lottery prospects in addition to some visual impressions from workouts and gut feelings from team interviews, but what NBA scouts and general managers do with that information is always the most interesting part. The NBA Draft rumor mill always heats up in mid-June, and this time combine participants like Kendall Marshall, Austin Rivers, Jeremy Lamb, Terrence Ross, Perry Jones III, Terrence Jones, Jared Sullinger, John Henson, Andre Drummond, Meyers Leonard and Tyler Zeller all felt the subtle (or not-so-subtle) impact of factors outside the scope of their game tape and college résumé.

As with Vol. 1 of this series, I created a collection of the most recent mock drafts from top sites across the internet and put a creative twist on the whole process to provide a more comprehensive NBA Draft landscape. While some outlets did not project picks beyond the lottery in Vol. 1, I switched the pool of mocks to ensure they did in this version. For the post-combine Vol. 2 I pulled from (1) Draft Express (Jonathan Givony, 2x), (2) CBS Sports (Jeff Goodman), (3) ESPN (Chad Ford), (4) NBA.com (Scott Howard-Cooper), (5) SI.com (Sam Amick) and (6) NBADraft.net.

Just like last time I color-coded the prospects, mapped out each mock, listed the current range for every player projected in the lottery and set up composite scores based on an average value from the septet of mocks. Draft stock movement is recorded and analyzed as well. If you want more coverage, be sure to check out my other work on the 2012 NBA Draft: 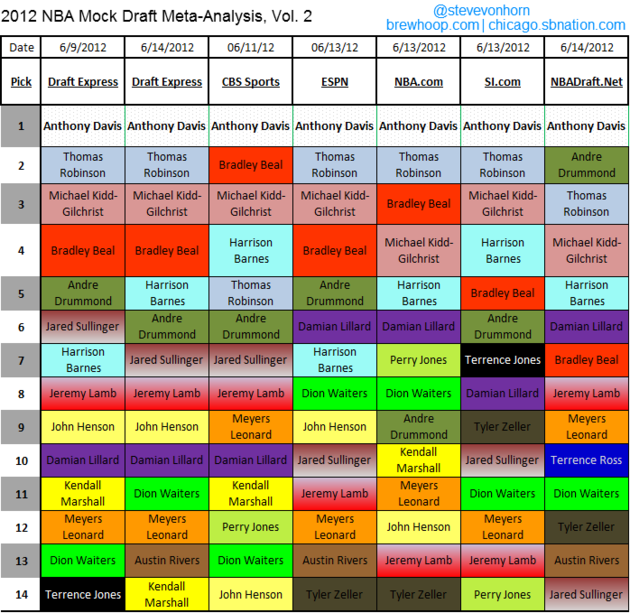 One of the big winners since Vol. 1 has been Syracuse combo guard Dion Waiters, who announced a draft-day promise from a lottery team before the combine and pulled out of drills and interviews -- the promise is reportedly from the Phoenix Suns (No. 13 overall) but the Toronto Raptors (No. 8) have been implicated as well, despite their denials. ESPN's Chad Ford was the first media member to peg Waiters as a lottery pick, and now every outlet has the drive-first sixth man in the top-14 picks thanks to the apparent existence of a promise. For what it's worth, Draft Express still has Waiters ranked No. 19 on their big board. Ford moved him up to No. 8 in his Top 100 before the combine and hasn't change it since.

Duke shooting guard Austin Rivers also may have received a lottery promise, but it hasn't impacted his status in the mock draft universe. Rivers measured well, carries an elite NBA pedigree and was the second-best high school prospect upon entering college, but he still can't manage to escape the No. 13-to-No. 16 range. The stability of his draft stock speaks to his talent, but it also highlights the lingering concerns about his lack of elite athleticism and combo-guard build with shooting guard tendencies. With a similar players (Waiters) presumably jumping him based on a promise, Rivers gets pushed down due to a certain rising big man.

Illinois center Meyers Leonard is that man. He seriously impressed NBA executives at the NBA Draft Combine in Chicago, and it turned him into a "big riser," especially after he measured better than Tyler Zeller. Chad Ford noted that most NBA execs left the combine with Leonard ahead of Zeller on their draft boards, while Jason McIntyre of The Big Lead reported that Leonard jumped both Zeller and John Henson and that he is receiving "serious consideration" from the Portland Trail Blazers (picks No. 6 and No. 11), Detroit Pistons (No. 8) and Milwaukee Bucks (No. 12).

Leonard is the second-highest riser in Vol. 2 behind Waiters, and after mixing in the back end of the lottery before the combine he has jumped into the No. 9-to-No. 12 range. Any time an NBA team thinks they can lock down a 20-year-old seven-footer on something like a four-year, $10 million deal (I'm roughly approximating the draft slot figures), they don't need much of a reason to pursue that route. Leonard only started one season at Illinois, but he is catching the eye of GMs and scouts thanks to his athleticism, potential, NBA-body and defensive tools. 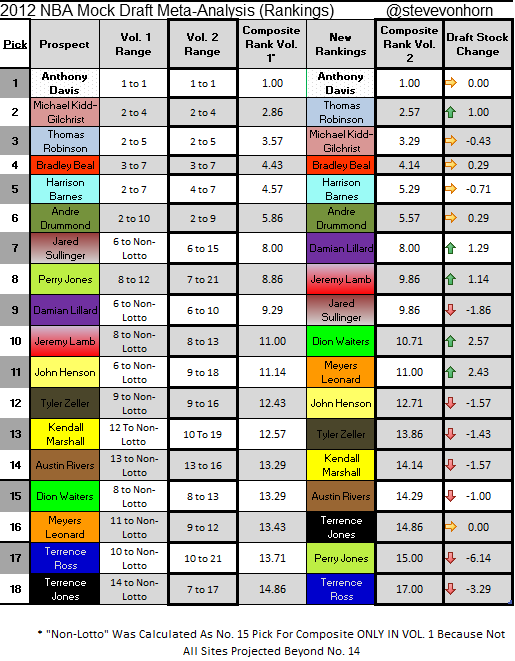 Thomas Robinson tried to make some noise by claiming he should be under consideration for the No. 1 overall pick -- it isn't even worth considering the idea, Anthony Davis will be a member of the New Orleans Hornets -- but he actually did move up on the board. Robinson and Michael Kidd-Gilchrist are thought to be in direct competition to become the No. 2 overall pick (though the Bobcats are shopping the pick as well), and it appears most draftniks are siding with the Kansas prospect. In fact, MKG isn't the second pick in any recent iteration, as Bradley Beal and Andre Drummond are the ones who alternatively sneak in at that spot.

In any case, the most important revelation from Vol. 2 is the stratification of the draft class. Anthony Davis is certainly the top prospect, and he joins MKG, Robinson, Beal, Drummond, Harrison Barnes and Damian Lillard as the only sure-fire top-10 picks right now. In case you are counting along, that makes only seven players capable of creating consensus in the first 10 selections.

Everyone after Lillard is divisive in their own right, but at least Jeremy Lamb, Dion Waiters and Meyers Leonard hold the right combination of draft buzz and upside potential to lock them into the lottery as well. That brings the official lottery pick consensus count up to 10 prospects. Those final four spots may be impossible to project.

Perry Jones III posted terrific measurements at the combine (as expected), but he dropped farther than any other tracked player during the last two weeks. After being listed no lower than No. 12 before the combine process, Jones dropped out of the lottery in every mock except for CBS Sports (No. 12) and NBA.com (No. 7). How someone with his level of talent could drop to No. 21(!) is beyond me, but teams have been scared about his lack of a killer instinct and preference for the perimeter for quite a while. Apparently he hasn't done anything to dissuade these writers or their NBA sources of those notions.

Another lottery prospect on the decline is Washington shooting guard Terrence Ross. Some combination of lackluster measurements (specifically his wingspan and standing reach), weak ball-handling skills and an offensive game with rough edges has caused Ross to disappear from the lottery on most sites.

As for the others (John Henson, Jared Sullinger, Tyler Zeller, Kendall Marshall and Terrence Jones), nobody can agree whether their deficiencies or their strengths are more prominent or important. Workouts could help hammer out a more comfortable hierarchy, but the unique tools of each player could force the context of team roster needs to the forefront on draft day and leave us all in the dark until then. 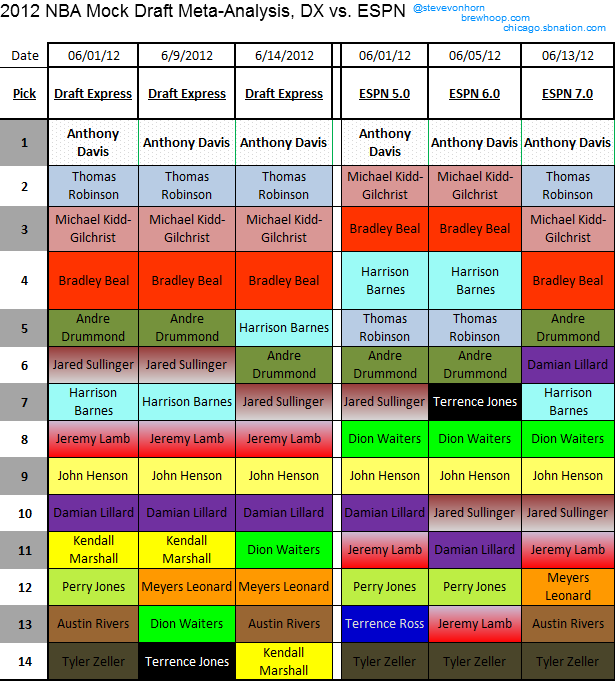 For starters, you can see that ESPN has aligned with Draft Express on the order of the top-4 picks in the current projections. Davis, Robinson, MKG, and Beal are the first quartet off the board, while Andre Drummond and Harrison Barnes are close enough to suggest agreement. Oddly enough, John Henson is locked in at No. 9 to the Detroit Pistons. There are a multitude of combinations to consider at the other spots, so feel free to look the lists over and pass along your comments below.