Share All sharing options for: This Is The Best Michael Jordan + Dennis Rodman Back Tattoo You'll See All Day

The Bulls headed into the 2012 NBA Playoffs with a sterling 50-16 record and homecourt advantage throughout. They also entered the postseason with Derrick Rose having two functioning knees and Joakim Noah having two functioning ankles. You know how that worked out. In the end, the Bulls became the fifth top seed ever to lose in the first round of the NBA playoffs. Sad times. Like, so far as sports fandom is concerned, this is truly the pits.

Related: O'Donnell: Luol Deng Will Play For Great Britain In The Olympics, And Deserves Chicago's Support

Everyone grieves in different ways, though recent studies show most people grieve with sad Facebook statuses. While that remains largely true, sometimes people grieve in more artful ways. Like by getting big-ass tattoos of Michael Jordan and Dennis Rodman scrolled across their back. 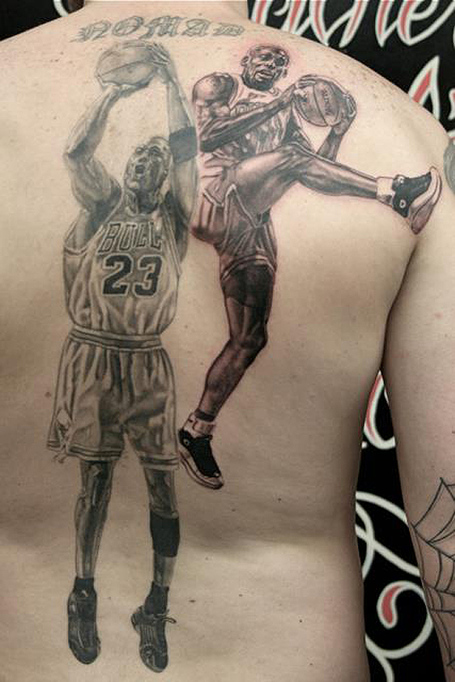 Pretty great grieving method right there. You have to assume this is an unfinished designed, otherwise Scottie Pippen will have some serious beef.