Before the Chicago Bulls secured their 50th win on the final night of the regular season on Thursday against the Cleveland Cavaliers, Chicago turned to forward Brian Scalabrine to address the United Center crowd before the opening tip. Scalabrine has been one of the most popular players on the team since signing with the Bulls last season for an assortment of reasons, most of them good (great practice player, teammates and coach Tom Thibodeau love him, ect.).

"SCAL-A-BRINE" is actually an easy and fun name to chant, I suppose.

As Scal saluted the UC crowd before the playoffs officially began, Comcast SportsNet put up a hilarious graphic. 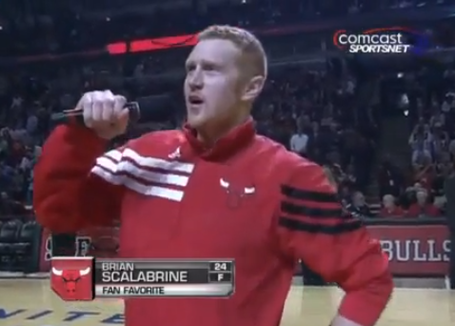 For more on this game, stick with SB Nation Chicago. For more on the Bulls, head over to Blog a Bull. For more news, notes and analysis from around the NBA, visit SB Nation's NBA news hub.

Cavaliers Vs. Bulls: Chicago Blows Out Cleveland, Gets Win No. 50