The Chicago Bulls are setting up for a run in the 2012 NBA Playoffs, and here is a look at how Derrick Rose and company compare to their peers across the league.

The 2012 NBA Playoffs are nearly upon us, and the Chicago Bulls have big plans now that they have clinched the top overall seed in the Eastern Conference. Many of Chicago's plans are highly dependent on the health of star point guard Derrick Rose, but how does the rest of the roster stack up? Can Carlos Boozer, Joakim Noah, Luol Deng, Kyle Korver, Omer Asik, Richard Hamilton and Taj Gibson make the difference in the playoffs? Has Tom Thibodeau been masking deeper offensive problems by enforcing the highest standards on defensive intensity and making up the difference on that end? With these questions in mind, I've used advanced statistics to provide some insights. Before we get to the data, here's what I did:

Four Things You Need To Know

(1) Players Are Compared To The Corresponding Positional Average And Minute Threshold. The idea behind this project is to explore player performance in relation to the average player at their position. Many lines have been blurred in the positional revolution, and while shooting guards and small forwards are doing very similar things on the court, basic differences between point guards and centers have endured. Big men are grabbing the rebounds, point guards are dishing out the assists, and the bulk of shots are coming from very different locations on the floor (on average). The comparisons won't always be perfect, but using positional averages makes the exercise more useful in my mind.

Along the same lines, there is a general trend in the NBA that better players play more minutes. Even rate stats increase on average when breaking down positions at the higher minutes per game thresholds, so while it's fun to compare Derrick Rose to Toney Douglas, it makes more sense to use other starting PGs as the measuring bar. I've broken each position group into two segments (10+ min/gm and 25+ min/gm) so the top players are subject to a smaller pool and the role players get an expanded basis for comparison. With teams tightening rotations up for the playoffs, high end matchups are far more likely to see now.

(2) I've Altered A Few Things To Make It More Intuitive. First of all, this exercise covers offensive and rebounding stats exclusively, because there aren't enough reliable defensive metrics at the individual level to work with. Again, remember that defensive impact is not included in this analysis -- I would recommend checking out 82games.com for +/- stats and counterpart PER allowed if you'd like to take a deeper look.

A trio of alterations have also been applied to make the data more understandable: (a) Turnover Rate is the only stat where a lower value is better, so I have flipped the values to make a lower TOR appear as above-average, (b) low sample size shooting zones -- 3-9ft and 10-15ft -- have been combined into a single value and (c) a 50 attempt minimum threshold has been imposed on each shooting zone to avoid misleading stats like Andrew Bynum's three-point shooting percentage.

(3) Here's An Example. Mike Dunleavy is a SF who plays 26.2 min/gm, so I compared his production to the averages for NBA SFs that played 25+ min/gm this season. For example, Dunleavy has an Assist Rate of 20.43, while the average NBA SF (25+ min) has an AR of 17.8. Dunleavy is clearly above average, but I compare his value by indexing against the average. Dunleavy's AR is divided by the positional average and multiplied by 100, and the resulting value 114.7 means that Dunleavy is 14.7% better than the average SF (25+ min/gm) when it comes to AR. 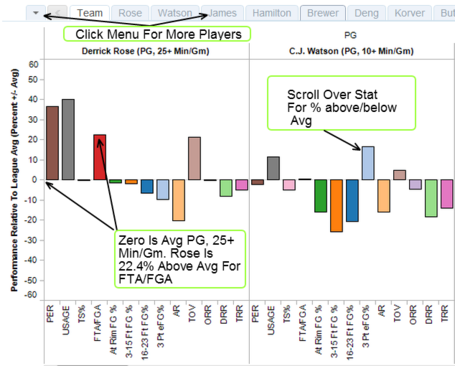