Just minutes away from the home offices of SB Nation Chicago last night, a star-filled party raged on the streets of Milwaukee Ave. It's principle components were LeBron James and Dwyane Wade, style icons and philanthropists who also punch the clock for the Miami Heat when they aren't raising money for charity or painting their toenails. The pair was in Chicago due to a Thursday night meeting with the Chicago Bulls at the United Center, the perfect excuse to spread their party wings and bask in the warming glow of their own celebrity status. You don't throw a fiesta in the Windy City without surrounding yourself with other local luminaries, and the Heat duo certainly did the damn thing last night. They got Jim Belushi! 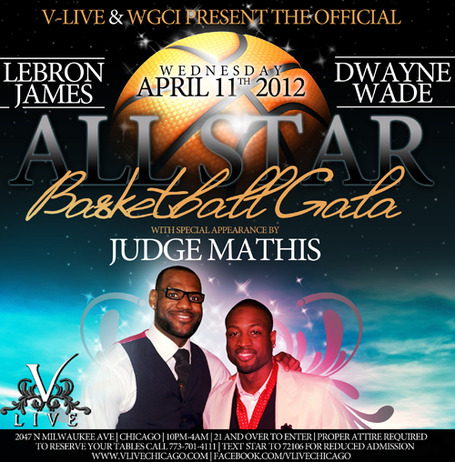 "The defendant is found guilty......of having a great time!"

This, presumably, is why Judge Mathis was in the house. Also: I don't know who the SuperFriends have on-board as an in-house flyer guy, but said flyer guy should probably learn to spell Wade's first name correctly.

All of this begs the question: do the Heat do this in every city they visit?

For more on this game, stay with SB Nation Chicago. For more on the Bulls, visit Blog a Bull. For news, notes and analysis from around the league, check out SB Nation's NBA news hub.