Heat Are Boys, Bulls Are Men, Says One Edited Photo

Share All sharing options for: Heat Are Boys, Bulls Are Men, Says One Edited Photo

As we're all well aware, Dan Bernstein, the Bulls must get through the Heat to have any shot at an NBA title (so stop being such a Debbie Downer/Kool-Aid shitter, sir). What makes the matchup even more intriguing is the very large image gap between the two teams. Miami is the flashy, trendy douchebag, rocking a pocket square and thick, black-framed glasses at Fireplace Inn on a Friday night (you know who you are). Chicago, on the other hand, is the humble, sophisticated gentleman, who's hard work and respectability has led to being named the youngest CEO in company history and garnered an invitation to Rahm Emanuel's son's Bar Mitzvah.

The Bulls are the team you want your sister to date. The Heat are Sean Avery.

The picture following the jump gives further visual proof of this phenomenon. 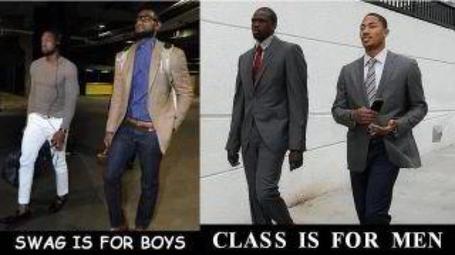 For updates on the matchup, stay tuned to SB Nation Chicago. For more in-depth coverage, visit Blog a Bull and Penisula Is Mightier. News and notes from around the NBA are available at SB Nation's NBA news hub.