Video: Derrick Rose Beats The Bucks At The Buzzer

Share All sharing options for: Video: Derrick Rose Beats The Bucks At The Buzzer

Derrick Rose has hit game-winning shots before during his 3.5 season reign as the face of his hometown Chicago Bulls, but I'm not sure if he's ever hit a game-winner quite like this. Rose got the ball in hands with :18 seconds left in regulation and the Bulls and Milwaukee Bucks tied 104-104 at the Bradley Center, aka United Center North, aka the same court where Rose would hear both "M-V-P" chants and a smattering of boos earlier in the night.

Usually in these situations, Derrick likes to go early. It makes sense. The Bulls are an elite offensive rebounding team, and leaving a few seconds on the clock when he makes his initial move only gives Chicago's high-energy front-court a chance at a tip-in should whatever frantic shot Rose attempts fall short. But on Tuesday, with Milwaukee content to leave point guard Brandon Jennings out on an island with Rose and not throw a double-team at the Chicago superstar, Rose knew his place: he would hold for the final shot and make sure if the game was ending in four quarters, he would be the one to decide it.

With four ticks left and his toes at the three-point line on the right wing, Rose would make his move. He crossed-over Jennings left, then right, then left again; he jumped to his left to create an absurd amount of space and then fired the game-winning shot over Jennings' out-stretched arm. The ball would sink through the net as time expired and Chicago would have its eighth straight victory.

Check out the video:

Rose is lauded as one of America's most humble star athletes and is constantly gracious in interviews, but after hitting a buzzer-beater like that, it's impossible to hide your swagger. Hey Milwaukee: something stinks. 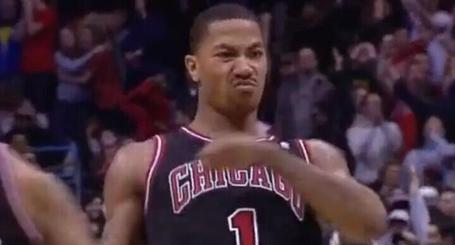 For updates on the matchup, stay tuned to SB Nation Chicago. For more in-depth coverage, visit Blog a Bull and Brew Hoop. News and notes from around the NBA are available at SB Nation's NBA news hub.