The Chicago Bulls had a strong presence at All-Star Weekend whether they wanted to be there or not. The Bulls Notebook also looks at All-Star fashion trends and how to fix the dunk contest.

1. As if you couldn't already tell that something as frivolous, pompous, and self-adsorbed as the NBA All-Star Game was the type of event our Chicago Bulls would deem detestable, if not treat with all-out hostility, it didn't take very long to prove the point on Sunday night. The NBA All-Star Game is a celebration of many things -- individualism, wealth, youth, ect. -- but its ideals run in the face of everything Tom Thibodeau's Bulls have come to stand for over the last season and a half. The All-Star Game is "Watch the Throne", and our Bulls are just a little too understated for something so grandiose, as fun as it may seem.

As the stylings of hip-hop/pop star Nicki Minaj gave way to the Eastern Conference roster introductions, it took exactly two seconds for the Bulls to turn the event sober. The Minaj performance transitioned to a shot of Eastern Conference coach Tom Thibodeau, who couldn't give as much as a smile or wink to the camera, only coldly raising a hand in an acknowledgment that, yes, his Bulls are above all of this.

Luol Deng was next and would lighten the mood some by showing up to the party out of dress code, donned in a t-shirt with a picture of his native Africa on it. This is as close to punk rock as the Bulls get. Derrick Rose would end the proceedings on a sour note: looking like a caged rottweiler on quaaludes, remaining statue-still as his name was announced among the Eastern Conference starters. His peers didn't have such reservations about basking in the moment.

For a basketball team with its nose permanently glued to the grindstone, the All-Star Game simply does not cater to the interests of our Bulls. You can't win we-in the All-Star Game, so why even bother showing up?

After tip-off, the game offered even more reminders. Thibodeau can normally be seen with his eyes popping out of his skull when he coaches the Bulls; often times, he'll wander onto the court enough to make it seem like he's the third man in the half-court trap. On Sunday, Thibs was restrained, coaching sitting down until the final minutes of a close game activated his dormant coaching instincts. Rose's disinterest was on full display, as well. As the game began with high-flying action at both ends, Rose seemed content to jog and pass the ball to his otherworldly teammates. Even when Rose did start scoring in the second half, it certainly came with no style points. The final line looked good -- 14 points in 18 minutes -- but it was done on a combination of jumpers and layups, ie: the exact type of play the All-Star Game is built to disvalue.

When the game got close and contested at the end, Rose was the only East starter not on the court, with Nets guard Deron Williams taking his place. Deng would play all of five minutes after tweaking his injured left wrist and that was that: an exhibition with a clear Chicago presence ending with no Bulls flavor. That's just the way they like it.

There was a groundswell from other too-invested NBA consumers that Rose's inability to let himself enjoy the moment tainted a bit of the fun. The All-Star Game, after all, is about having a good time, and Rose's very real contempt for the entire event was clear as day. But for all of the faux-drama surrounding Rose's lack of dancing, anything else would have been inauthentic. Fans of anything are said to demand only honesty from our celebrities, and the reactions of Rose and Thibodeau were purely genuine.

As we said before this whole thing started: the All-Star Game, for better or worse, is beneath the Bulls. If the people really want to see Rose dance, they'll have to wait for a Grant Park victory parade.

2. The All-Star Game happened on the same day, at the same time as the Academy Awards, opening the door for all the jokes the Internet could handle. Some compared All-Stars to Best Picture nominees; others accurately noted that movies cannot win the World Series.

One thing remains eminently clear: while the All-Star Game and the Oscars are anything but symbiotic, they could certainly stand to learn something from one another. Case in point: the NBA All-Star Game needs a red carpet the way Vlade Divac needs a shower. Which is to say: BADLY.

No one throws a party like the young and wealthy, and All-Star Weekend has both in spades. Before the main event kicked off on Sunday, the NBA's best and brightest got a chance to strut their finest duds at All-Star Saturday. Not in the actual events, mind you, as LeBron and Co. are far too overqualified for the dunk contest. But from courtside seats, some of the NBA's biggest stars made a palpable fashion statement: they either love "Pinkerton" as much as the rest of us, or just think dark, thick-rimmed glasses are the new hotness. 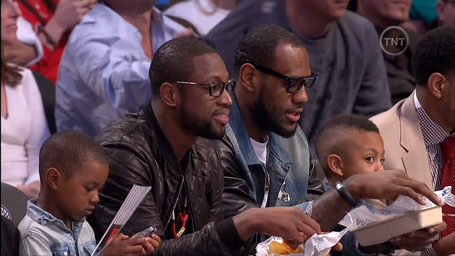 I see you, Russell Westbrook and Dwight Howard. 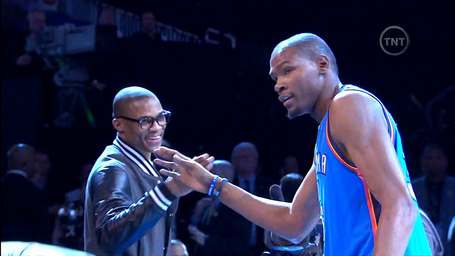 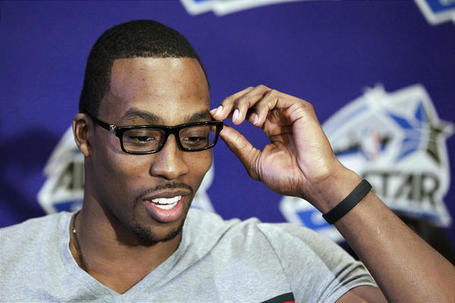 This is the 20-something bro equivalent of showing up to a bar and everyone in the group is wearing a flannel shirt. Show some fashion originality, NBA All-Stars. The answer to "Who are you wearing?" shouldn't always be 'Chuck Klosterman'.

3. In a Tuesday column at GQ focusing on America's obsession with "fixing" things that appear broken, writer Bethlehem Shoals conceded "I'm not sure how to fix the dunk contest". That's OK, because I think I have a plan.

I love the dunk contest. I was 12 years old when Vince Carter forever destroyed it and recreated it in his very image, which is probably the ideal age. As time has passed, though, the biggest stars in the NBA have ducked the dunk contest for one simple reason: they have nothing to gain, and a decent amount to lose.

Our expectations for LeBron James in the dunk contest are so high that anything he did would only amount to a disappointment. Unless James was dunking from half-court, doing a 720, or leaping over the entire roster of the Charlotte Bobcats (what else are they doing on All-Star Weekend?), America would come away underwhelmed. But there's a way we can change this: by eliminating every ounce of structure and turning the dunk contest into a free-for-all joyride with nothing on the line.

The X-Games is actually a good parallel fom the dunk contest, and if my 12 year old memory remains intact, this is how they do their "Best Trick" competitions: no scoring, no "turns", no spotlight, just a bunch of dudes sitting on top of a vert ramp, waiting to drop-in and go big. That's what I want the NBA dunk contest to be.

Picture this: LeBron, Rose, Howard, Westbrook, Wade, Blake Griffin, Kevin Durant, Carmelo Anthony and other stars who can jump out of the gym, all standing on one side of the court while Kanye/Rick Ross/Nicki Minaj/Eminem/Jay-Z/Drake/Lil Wayne stand on stage at the other side of the court, churning out hits. The format looks like this: it's a half-hour jam session, come and go as you please. Voting can be done via texting and Twitter, since this is the only way we know how to live in 2012.
This way, you're eliminating every ounce of pressure. There will be no more "It's time for The Birdman to fly" moments; just a bunch of dudes trying to one-up each other in a no-rules open gym soundtracked by their hip-hop friends.
Today, LeBron, Rose and all the rest fear the embarrassment of letting down the people. But if we turn the whole thing into a party where all it takes is one sick dunk over the course of 30 minutes to bring down the house and win over peers and public alike, the dunk contest would again be appointment television. After a lame contest this year, it needs something.

4. If you've found your way to this spot, you're likely Web-savvy enough to know about The Basketball Jones, the self-made Canadians who have graduated from podcasting in the kitchen to being a legitimate force of nature on the NBA scene. I'd be remiss if I didn't point to the excellent work of The Jones in an All-Star Weekend recap, so here's their "headlines" video. It's worth your time.

Shots fired at Minaj *and* Rodman? You still got it, Ozzie.

Look how close Trey is to Pitbull! 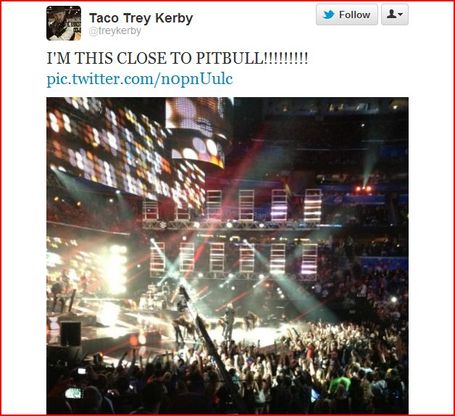 Made a Cash Money Records reference during our recap of Saturday (up soon) and then played pickup w/ Jadakiss at Jordan game. #allstar2012

LeBron seems like the guy who doesn't actually wear glasses but does for no reason.

Thibs might start watching Hornets film at halftime. Bulls have practice tomorrow at 2.

6. Two things we couldn't hold for this column: