Once Again, Derrick Rose Doesn't Dance At The All-Star Game

Share All sharing options for: Once Again, Derrick Rose Doesn't Dance At The All-Star Game

As it became clear Rose would start his first All-Star Game a season ago, much of the hype leading up to the affair centered on the Eastern Conference's starting lineup introductions. Specifically: with the team being led by charismatic perennial All-Stars LeBron James and Dwight Howard, the East had a bit of a reputation for getting jiggy with it when the lights went dim and the smoke machines were turned on just before tip-off. This baby definitely knows what I'm talking about. But when Rose was pressed on the issue in the weeks leading up to the game, he made it very clear he was certifiably dreading the moment with a series of very candid and very hilarious quotes. The occasion came and went and Derrick remained statue still -- not even a smile, much less a quick hip pop.

On Sunday, Rose made his second All-Star start. The world waited anxiously: would Chicago's homegrown superstar cut a rug and throw the deuce up in the sky just for the shutterbuggs? In a word, no.

As LeBron and Co. basked in the spotlight, Rose......just stood there, waived, and made the same face he always makes. 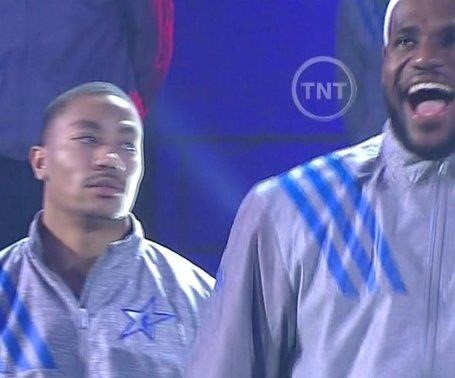 The .gif is even better.

As we noted on Friday, the All-Star experience is a joyless one for our business-or-bust Bulls. I think it's funny and great, but some other high-volume NBA observers were less pleased. SB Nation NBA czar Tom Ziller fired off a series of tweets in the moment condemning Rose for his clear dissent towards fun. Meant to be read from the bottom-up: 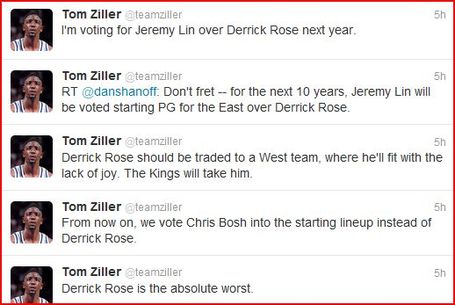 Because this is a Very Important Issue, D. Rose was asked about dancing after the game by the Tribune's K.C. Johnson. His response was amazing.

DRose: "I can dance. But there’s a time and place for that. And I don’t think that it was then and there." #Bulls

Every time Derrick refuses to have fun, we love him more and more.