Chicago Bulls mascot Benny the Bull is something of a professional rabble-rouser, and the All-Star Game is his Rushmore. Two years ago, Benny infamously busted out the "Single Ladies" dance in front of Jay-Z and Diddy, who looked decidedly unamused. Last year, he snuck up behind Justin Bieber and put the kid in a chokehold. With the Bulls' presence at the All-Star Game stronger than ever in 2012, the spotlight was on. SB Nation Chicago is glad to report sports' most mischievous mascot did not disappoint.

To the surprise of no one who has ever had a big bag of popcorn tossed on them unexpectedly at the United Center, it appears as if Benny caused more havoc than ever at the All-Star Game this year. His reign of terror cannot and will not be stopped. 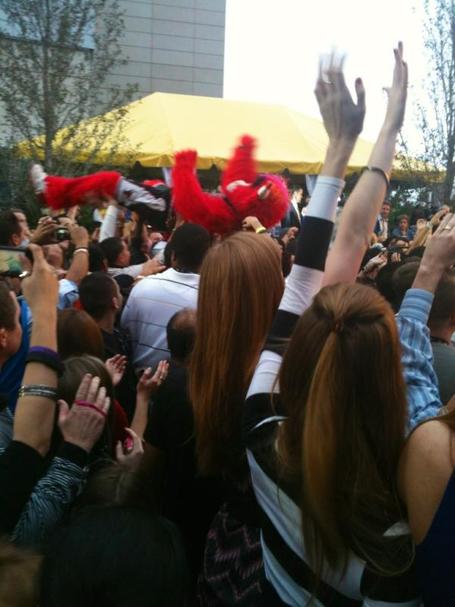 Tweets That Made My Day, Part I:

Benny the Bull is roaming the court searching for mischief.

Oh, god, Benny the Bull is nearby. I am genuinely terrified of him.

Mascot S&M: Benny the Bull, bending over a barrel containing memorabilia, as Harry the Hawk mock spanks him. This just happened.

We'll close with a word from the mascot himself:

This is what I've learned so far at All Star tonight. Chris Brown thinks I'm hilarious and 50 Cent wants to kill me.#fail

Until next year in Houston, Benny the Bull. A nation awaits.