An MRI revealed today that there is no structural damage to the back of Chicago Bulls star point guard Derrick Rose, who has been in and out of the lineup the last week with what doctors confirmed as back spasms. Rose will remain listed as day-to-day as Chicago begins a six-game homestand on Tuesday vs. the Sacramento Kings.

"When we all feel he feels well enough to play, he'll be back out there," general manager Gar Forman said. "He could respond overnight. It could be a couple days. When it's muscular, you don't know. But this is positive."

"Derrick is a competitor and always wants to play," Forman said. "We'll be smart about this, but there's a difference between whether a player is hurting and injured. If a guy is hurting, obviously they have to make a determination on how much they feel they can do. If a player is injured and could do greater harm, we're not ever going to put him out there."

"Does a player have input? Of course he does," Forman said. "It's their body. But, again, if a player is injured, we're not ever going to put him out there."

The community at Blog-a-Bull used today's news to poke fun at Bulls coach Tom Thibodeau, who pushed Rose last Wednesday against the New Orleans Hornets during a blowout win. 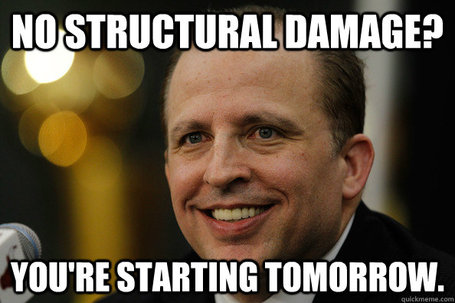 For updates, stay tuned to SB Nation Chicago. For more on the Chicago Bulls, drop SB Nation's Chicago Bulls blog, Blog a Bull, or check out the SB Nation NBA news hub for more breaking news and analysis from around the league.