A Sunday matinee against the Boston Celtics calls for an emergency edition of SB Nation Chicago's "Bulls Notebook".

Good teams have an innate ability to make their fans believe **anything is possible**, even when those things tend to go in the face of well-worn sports realities we've become conditioned to accept as truths. Make no mistake, the 2012 Chicago Bulls are a very good team.

Heading into a Sunday matinee against the Boston Celtics, the final tilt in a nine-game winter road trip, the last week for the Bulls had been characterized by one thing: blowout wins sans Derrick Rose, who is fighting off an unwelcomed bout of back spasms. Sure, the competition (New Orleans, New Jersey, Charlotte) was hardly inspiring, but these were still road games, and still contests Chicago seemingly put out of reach before the first half ended. This was decidedly impressive, enough so to lull some into believing Chicago could roll through any team this side of the Galactic Empire with such ease and grace. Derrick Rose, who needs him, question mark, exclamation point.

But against the Celtics on Sunday, Chicagoans learned that sometimes cold, fast logic can drown out those magic intangibles the Bulls have in spades. These aren't your older brother's C's, the squad that went to the Finals twice and won once, but the names remain largely the same. Sure, Kevin Garnett's face has a few more cracks, and Paul Pierce looks even less explosive, if that's possible. But it takes only the sight of Ray Allen's sweet stroke or a singular Rondo ball fake to remember how easily the past can roar again with Boston. Even if the Celtics make you question the definition of elite, they're still a measuring stick; an opponent that can't be described as anything but legitimate. It would make sense then that without Rose and guard Richard Hamilton, the Bulls, likely itching for their own beds and some home cooking after so many road games, simply couldn't keep up with Doc Rivers' crew.

The box score from Chicago's 95-91 loss in Boston is likely more encouraging than watching it would lead you to believe. Chicago was down the entire contest, and the deficit grew as large as 14 in the fourth quarter. Tom Thibodeau's Bulls have taught us they're never quite out of it, and on cue, Chicago came roaring back to make it a one possession game in the final minute. They went small (Carlos Boozer at center, Luol Deng at the four), used a 3/4's court trap to force turnovers, and got to the foul line often enough to chip away at the Celtics' lead. But when the little hand struck Crunch Time, Chicago simply didn't have the one soldier it needed.

C.J. Watson has done a damn fine Derrick Rose impersonation when he gets the opportunity, but he would have no such power on Sunday. Hero Ball doesn't work without the bigwig, and Chicago's was resting his back on Sunday, not bailing out his teammates and kick-starting another improbable comeback.

Losing to those green Boston jerseys is never easy, especially when Garnett is wearing one. But if we're talking Big Picture -- the only picture that matters when your hometown basketball team is this good -- Chicago's effort almost registers as valiant more than anything else. The C's and their fans should savor this victory, but if these two meet again in the post-season with Rose in tow, I doubt Chicago will be losing much sleep.

2. I'm going to out myself up front: if I could play basketball like any human being on the planet, it would be Rajon Rondo. He is, in my estimation, the Most Compelling NBA Player Alive, at least if we collectively agree LeBron works under a different set of circumstances than everyone else. The Bulls fan in me recognizes why he is loathed -- "Superbad" taught us "people don't forget", and you can't throw Kirk Hinrich into the score's table and give Brad Miller a forearm shiver to the head and one day expect to be revered. I fully realize this. But as a sports fan, Rajon Rondo did the otherworldly things against the Bulls on Sunday that make him such a luminary. If it wasn't coming against my team, it would have been picture-perfect.

Box scores can lie, but this one didn't: Rondo's final line -- 32 points, 15 assists, 10 rebounds -- felt every bit as substantial as the numbers look. He was brilliant, no other word to describe it.

Rondo dominated Chicago in what was a quintessentially Rondoian performance: he found passing lanes few other humans alive could have seen, he glided unimpaired to the hoop with a vague sense of both recklessness and control, and he used those alien-like limbs to wreck defensive havoc. This time, he even made his free throws.

Rondo is, of course, far from a perfect player. The debate that raged even until midseason last year -- who's better, Rondo or Rose? -- now appears impossibly one-sided. But all of those limitations Rondo holds -- remember, we're talking about a point guard who can't shoot jump shots or free throws -- make him that much more endearing, at least on some strange level that may only be evident to the most high-volume NBA consumers.

A TV shot of Rondo wearing a towel over his head on the Celtics bench caused this rapid fire joke-off in my living room:

I can postulate on Rondo all day, but given the way Chicagoans feel about him, I'm sure this is 12 levels past annoying already. I'll exit with this: all things considered, doesn't it seem like basketball is the sport Rondo is perhaps most ill-suited to play? I mean, what type of franchise point guard can't break 60 percent from the foul line?

Dude would be the greatest cover corner of all time. Could you imagine him as a midfielder in soccer? What about as a goalie? A vacuum-style shortstop? A boxer???

No other athlete this side of LeBron conjures up such questions. I'm not asking you to embrace Rondo. By all means, continue hating him with the fire of 1,000 suns. But there is something going on here that deserves appreciation, no matter which city he calls home. Breathe him in.

3. Without Rose in the lineup, ABC's pre-game show focused much of its attention on Carlos Boozer. This prompted multiple camera shots of Boozer in shootarounds, which prompted many, many jokes on the Internet about his hair. OR SHOULD I SAY, "hair". 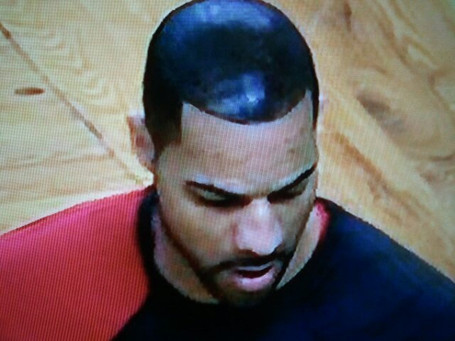 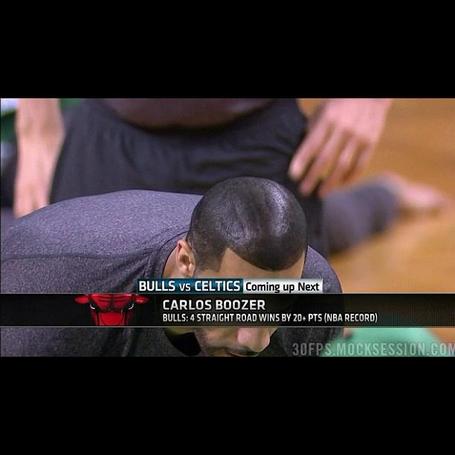 Good to see Carlos recognized the Celtics as a rival and decided to add an extra coat for the high-definition network TV cameras. It looks like it's colored in with a Sharpie, if not a traditional brush dipped into black paint.

Even when he scores 22, Boozer's redeeming qualities are somewhere between marginal and non-existent. I really think I just hate his face.

4. If there's a singular truth about Derrick Rose, it's that he just wants to "we-in". Watching the C's prevail over his team must not have been easy for Rose. He looked pretty emo on the bench. 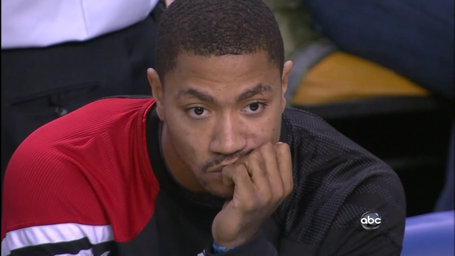 As the homie Matt from Blog-a-Bull noted on Twitter during the game: "Derrick Rose, looking like...he just won MVP #HeAlwaysLooksTheSame".

Much like Boozer's hair, this is a meme that keeps on giving.

I will never let this go.