SB Nation Chicago's Ricky O'Donnell sat down for a Q & A with Chicago Bulls guard C.J. Watson. Other topics in this week's Notebook include excessive minutes for the starters, Carlos Boozer's big games against bad teams, and Chachi Deng.

1. Chicago Bulls guard C.J. Watson is hoping to be selected for the Three-Point Shootout at NBA All-Star Weekend later this month, and on Thursday afternoon he gave me a call and pleaded his case to SB Nation Chicago. I also talked to Watson about team chemistry, his starter aspirations, and Carlos Boozer's probable hair plugs, among other things. Check it:

Why is it important to you that you're chosen as a participant in the Three-Point Shootout at NBA All-Star Weekend?

"It's something I always watched as a kid growing up. I would be honored to compete in it some day. I think I've been shooting the ball pretty well this season. It would be a great honor."

The "Bench Mob" earned its nickname last season, but all of you guys really seem improved this year. Ronnie's done a great job holding down a starting spot in lieu of injuries to Deng and Hamilton , you might be playing the best ball of your career, and Taj and Asik are playing great. Why is that?

"Everyone went into the offseason working a lot harder. Another year in Thibs' system makes a big difference. Everyone is comfortable. Everyone is shooting a better percentage and getting better looks."

Everyone credits this team's chemistry as a big reason for its success. That's the kind of stuff that is unquantifiable in a box score. Can you speak to the chemistry on this team?

"Everyone gets along real well. We all go out to eat together and hang out on the road. It hangs over onto the court. We like to share the ball. We're a team first and everything else comes secondary."

Your contract expires after next season. Obviously, the Bulls have Rose locked up long-term. Do you have starter aspirations?

"Of course, every player wants to start in the NBA. I'm in the position right now where I'm backing up D. Rose and we're winning. I'd love to start but I like the position I'm in now with a chance to win a title."

You've been playing alongside Rose in the backcourt more and more this year. How's that going?

"It's been fun. We're just trying to go out there and win games. We'll keep doing whatever it takes or whatever Thibs wants. It's fun playing with him. He gets doubled a lot, which leaves me wide open for threes."

"It's been tough. Really tough. You can tell with all the injuries in the league so far. You gotta take care of your body on the road, eat well, stay in shape. Hopefully we can go injury free into the playoffs."

Going back to a game in Denver last October, you've been playing really well when Derrick is out of the lineup. How does your mindset change when Derrick is hurt and you have to start?

"I just try to go out there and help my team. Try to be aggressive. I know I can score the ball or set my teammates up and give them a good look at the basket. The biggest thing is just being aggressive."

With 347,000 Twitter followers, you have more than many players with larger national profiles. How did you get so many?

"I get that question all the time. I have no clue."

How is the elbow feeling?

"I'm still in some pain. Just trying to get it pain free, to be 100 percent. I'm really hoping to be injury free for the rest of the season."

I have to ask you: what's up with Boozer's hair?

(Laughs) "It's interesting.....we joke with about it sometimes. I guess he's going with it."

What did you think of Will Farrell's player intros in New Orleans?

"Very funny. I knew it was funny when I saw Thibs was laughing. He never laughs at anything."

After my interview with C.J., I took to Twitter:

C.J. Watson (@quietstorm_32) was very cool. Wouldn't bite on my questions about Boozer's hair, though. That was ahanging curveball, man.

C.J. saw it and responded:

No sir not me lol RT @TUP_Ricky: C.J. Watson (@quietstorm_32) was very cool. Wouldn't bite on my questions about ... m.tmi.me/lHIRH

Something I didn't ask C.J. about: his beef with boxer Floyd Mayweather. It prompted me to make this C+ MS Paint creation last year: 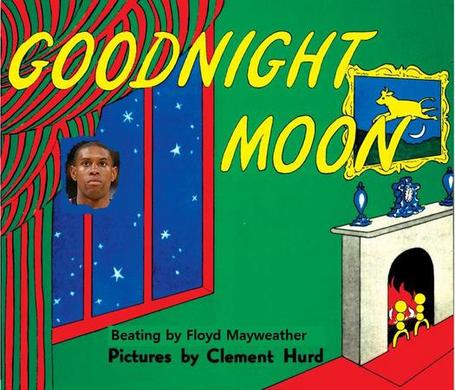 2. The burn from a blowout loss last Wednesday to the upstart Philadelphia 76ers was washed away this week by four straight wins for our Chicago Bulls, three of them wire-to-wire jobs that fell somewhere between "decisive" and "dominant". Nothing is more boring than blowout win after blowout win, at least as far as the news cycle is concerned. So it comes as no surprise that after Saturday's beat-down of the Bucks and Monday's thumping of the Nets, the rhetoric of the day reverted back to coach Tom Thibodeau's, shall we say, liberal use of his road worn warriors.

Here's the news hook: it's self-evident that Luol Deng is the straw that stirs the proverbial drink in Chicago, and after missing seven games with a relatively severe wrist injury, Thibodeau immediately returned Deng to his unparallelled workload. In his first game back against Milwaukee, Deng played 41 minutes, finishing with 21 points and nine rebounds. This was a game the Bulls led by 29 points after three quarters. Business as usual. Two nights later in New Jersey, Deng played 35 minutes, the second most on the team. The Bulls were up 20+ points for most of that game, too.

Thibodeau is a great coach, but flexibility is hardly one of his virtues. Thibs is as obstinate as they come, a close-minded tactician who has experienced a lot of success doing things a certain way. That includes sticking to cement-enforced rotations, even when players are hurting and leads are big. In Thibs' world, a player is healthy if the player can play. This is how you win regular season games at a breakneck pace, even if it comes with the risk of burning out your stars before the games really start to matter. In this sense, Thibs resembles a punk rock-addled teenager: if it's too loud, you're too old. If you can't handle the heat, kindly exit the kitchen.

It's easy to see why this is unnerving, even if Thibs has proven himself to be completely oblivious to it. When reporters ask about the excessive minutes, he responds defiantly, like someone offering unwanted parenting advice to a proud father. Here's what Thibodeau told the Chicago Tribune before the Bulls' Wednesday night win over the Hornets, a blowout that was actually sizable enough to give Deng et al. reduced minutes. No small feat.

"If a guy is injured, he shouldn't play. But if he can play, he should play," Thibodeau said before Wednesday night's 90-67 victory over the Hornets. "Somehow there's this notion of guys sitting out games. Pretty soon we'll be at the point where a guy sits out the whole season and just plays in the playoffs — if he can get there. I don't get that."

Of course, making the playoffs isn't much of a concern for the Bulls; their coach is just being difficult. Chicago's bench could probably secure the seven seed in the East. What's more important is pure survival from a health standpoint, and this condensed regular season certainly does nothing to help on that end.

It's imperative to remember, in a big picture sense, the timing of these questions to Thibs: this isn't second guessing, it's first guessing. When the Bulls played the Miami Heat in the Eastern Conference Finals a season ago, Derrick Rose looked exhausted. The Pacers created the blueprint for how to play Rose two rounds before -- hit him hard, and then hit him again -- and it's a plan that will no doubt be copied by every opponent Chicago faces in the post-season from now 'til the end of time.

Homecourt advantage is important, but at what cost? The Bulls had it last year, and it certainly didn't save LeBron and co. from stomping all over them in just five games. The worry here is that Thibs is too proud for his own good, and too stubborn to change his ways. At this point, it may not even be worth arguing over anymore: Thibs will push his stars in the regular season all he wants, haters be damned. Let's just hope this first guessing doesn't turn into "I told you so".

3. Before Wednesday's Hornets game started, I told a friend I expected Carlos Boozer to have a big night. After all, New Orleans is horrendous, and Boozer likes to save his best performances for games his team can win at half-speed.

Boozer proceeded to hang a team-high 18 points on the lowly Hornets, which prompted me to go to the box scores. When's the last time Boozer has played the well against a real opponent?

He's had exactly one good game against legitimate competition this year: a 20-point, 13 rebound effort in a win over Orlando on Jan. 6. He also put up 15 and six against the Lakers on Christmas Day, the opening game of the season. But by and large, Boozer has been great against the NBA's worst teams and terrible in games the Bulls have lost.

Look at Boozer's top outputs of the year: the cumulative record of the teams he's scored 18 points or more against is 59-146.The vast majority of his big games have come against the league's bottom-feeders.

In the Bulls' six losses? Boozer scored six against Golden State, 12 against the Hawks, 13 against Memphis, 11 against the Pacers, 10 against Miami and nine vs. Philadelphia.

4. On Monday against the Nets, Brian Scalabrine love reached a new level. With the Bulls mopping the floor with the Nets, the New Jersey crowd started chanting Scalabrine's name, and later gave the Bulls' bench-warmer "MVP" chants.

Yo Kyle Korver, what's up with that?

"Never," he said. "Tonight, I talked to some people after the game and everyone's in shock that it happened. It's just part of the game now for us. We know in the fourth quarter, if we're winning by five points, we know there's someone out there that's like, 'Put in Scalabrine!' Guys start chanting. He got MVP chants tonight. That's just the way it goes with Scal. He's a big deal."

I suppose it's worth nothing that Scal did play his first four seasons in New Jersey, but still. This is five levels past outrageous.

5. On Wednesday against New Orleans, actor Will Ferrell did the starting lineup introductions:

Let's run through those burns again:

Joakim Noah: "is a Scorpio and a horrible dancer."

Derrick Rose: "his favorite movie is 'The Notebook'".

What's funny is that Ferrell didn't even need to make something up to poke fun at Rose's taste in movies: his favorite movie is "Couples Retreat".

Chachi is that you. Lol RT @ChachiDeng: @LuolDeng9 I love you Lu.

6. Two things I wrote earlier this week that I have to include: