Joakim Noah has established himself as the Chicago Bulls' best player this season, and is helping the team keep up their winning ways even without Derrick Rose in the lineup.

Share All sharing options for: Chicago Bulls find another star in Joakim Noah

The Chicago Bulls are waging a war on style points this season, and they won't be finished until they've drained every ounce of fun one can draw from basketball as a spectator sport. You can't argue with the results, though. The Bulls have just successfully navigated the most daunting part of their schedule to date, a six games in 11 days stretch that saw Chicago score victories over the East-leading Knicks, the new-look Nets and their eternal rivals from Boston. The win against the Celtics on Tuesday gave the Bulls seven wins in their last 10 games and solidified their hold on the No. 4 seed in the Eastern Conference. It also might have been the best the team has looked all season. Coming off a true downer of a performance in Memphis the night before in which Chicago needed a pair of Luol Deng free throws in garbage time just to crack 70 points, the Bulls got back to doing what they do best against the C's at the United Center: playing stifling defense, killing the glass, and earning enough easy looks on the offensive end thanks to superior ball movement.

Nearly all of the focal points played tremendously against Boston, from Nate Robinson hitting all five of the Bulls' three-pointers to Carlos Boozer quietly putting up 21 and 12 despite somehow finishing as the only member of the team in the negative (minus-10) in terms of plus-minus. Luol Deng was great too, so was Taj Gibson. But Joakim Noah stood a cut above everyone else.

Noah drew national headlines for the decision to holster his signature 'finger gunz' celebration the night before in the wake of the tragic events in Connecticut on Friday, but it was the effort against Boston that reminds Noah is much more than a player distinct only by the peripheral stuff -- the hair, the taunting, the nearly unprecedented energy levels so many opposing fanbases find callous. It's no secret that Noah is always hyped to face Boston and Kevin Garnett. He set the tone early on Tuesday and never stopped on the way to the second triple-double of his career, finishing with 11 points, 13 rebounds and 10 assists.

It's impossible to expect Noah to hit such statistical plateaus each game, but the performance vs. the Celtics was hardly out of line with his recent efforts. Noah has established himself as a wildly skilled big man in his sixth season and is putting up what might be his most impressive campaign to date as the Bulls continue to live life without Derrick Rose. It's alright: with Noah now clearly cemented as the Bulls' best and most important player, it feels safe to say Chicago still has a star in tow.

Noah's pursuit of a spot on the All-Star team will no doubt receive much attention locally over the next two months, to the point where it will surely become grating. Fans like seeing their favorite players get recognized for their on-court work and Noah is definitely playing well enough to put his name in the discussion. Really, I don't care if he makes it or not. The fact that Noah continues to improve as a player and has been able to carry the team so many nights without Rose is good enough for me. Besides, what Noah is doing this season isn't far off from what he's been doing for the better part of four seasons now -- the main difference is just that he's been on the court so much longer.

The Bulls had a very capable backup center the last two seasons, a fact Omer Asik has only hammered home this season with his impressive play in Houston. With Asik behind him, the Bulls could be more conservative with Noah's minutes and not fear too much drop-off on the court: Noah averaged 32 minutes per game two seasons ago and 30 minutes a night in last season's truncated schedule. Now that Asik is gone, though, Noah rarely gets off the court. It's troubling.

Luol Deng leads in the NBA in minutes per game; Noah is second. He's averaging over 40 minutes per night, which is downright unprecedented for a big man. Here's the list of centers who have averaged more than 40 minutes over the last 30 seasons:

Yep, five guys over the last 30 years and three of them are Hall of Famers. For a player with an injury history like Noah's, it's a scary proposition, one that seems to be tempting fate. Wins now are important, but at what cost? If Noah isn't around for the playoffs, none of it will matter. We live in a second-guess society, so it's important to note how many people are first guessing all this: I did it a few weeks ago, Grantland has piled on, too.

Noah re-entering the game vs. Boston on Tuesday with five minutes remaining and Chicago holding an 18-point lead was nauseating. Doc Rivers had already pulled his starters, yet Tom Thibodeau saw fit to put his best player back on the court. The triple-double had already been secured. There was no reason for him to play 37 minutes.

It's easy to see Noah currently averaging per-game career-highs in points, rebounds, assists, steals and blocks, but the added production is mostly a byproduct of extended minutes. When scaled back to per 40 minutes, Noah's numbers look right in line with what he's done previously -- if not less impressive.

Noah may be the best passing center in the game. He made some brilliant feeds in his triple-double on Tuesday. I found this one the most impressive: 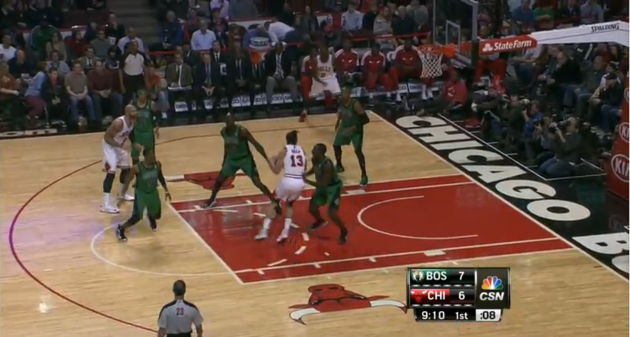 Noah gets the ball on the right side just inside the free throw line and starts making his way to the center of the court. Boston collapses with three men as Luol Deng gets ready to make a baseline cut from the corner. Noah is well-aware of where Deng is, and finds a way to deliver an impossible pass to Deng for an easy bucket. 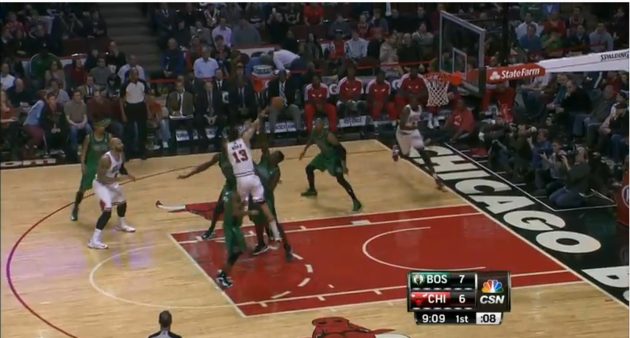 The Bulls have made a habit out of putting Noah in the high post as a facilitator this season, a luxury few other teams can boast. Effective plays like this one earlier from earlier this season against the Timberwolves have become commonplace thanks to Noah's passing acumen.

The 'finger gunz' celebration might be temporarily placed on ice, but Noah is still jacking up more outside shots than he ever has. Via Hoopdata, Noah is taking 2.5 shots per game from 16-23 feet, which is up from 1.1 and 1.2 the last two seasons. Noah has added confidence in his jumper, but the results are still mixed. He's currently shooting 37 percent on shot from that area after shooting 43 percent last season.

The majority of Noah's shot attempts are still coming at the rim. He's averaging 5.7 shot attempts per game from close range this season and is converting them 62 percent of the time, both career highs.

Zach Lowe had the jaw-dropping numbers on Tuesday: "Chicago is holding teams to 84.2 points per 100 possessions with the Gibson-Noah front line, a number 12 points stingier than Memphis's league-leading figure."

An All-Star? Maybe, maybe not. Whether Noah gets the recognition he deserves isn't really all that important. He's a star in Thibodeau's system, the Bulls' best player and a very big reason why Chicago continues to beat good teams without Derrick Rose. That's enough for me.