Nikola Mirotic is tearing up the Euroleague, and Bulls fans are starting to get excited.

The Chicago Bulls are playing some legitimately inspiring basketball at the moment, grinding out wins in six of their last eight games over some very impressive opponents despite a largely flawed roster devoid of any sort of offensive firepower. The Bulls' short-term future is obvious enough: they're in a holding pattern until Derrick Rose can return from a torn ACL, at which point they'll likely raise some hell in the playoffs before ultimately bowing out to a deeper team or one with more star power. While Chicago has put itself in an admirable position so far this season without Rose in the mix, it's still fair to question the franchise's long-term ability to build a viable championship contender. The Bulls had done just that the previous two seasons before the injury to Rose robbed the team of a chance to compete in the 2012 playoffs and the franchise's fiscally conservative ownership chose to replace a formidable bench with cheaper and less competent replacements.

What the Bulls have done this season has been commendable and there's no reason to believe they'll be anything less than a very tough out in an underwhelming Eastern Conference if and when Rose returns. But ask yourself this: are the Chicago Bulls winning a title as presently constructed? You're lying to yourself if you answer in the affirmative.

Rose needs help. It might be a simple enough observation on the surface -- the NBA is being run by teams with co-headlining superstars and Chicago's reliance on one player as a shot creator/maker reasonably amounts to a doomed proposition moving forward. But given the team's current salary restrictions and consistent refusal to use market size and record profits to its advantage, adding another star to the roster won't be easy.

A considerable amount of noise came out of Minnesota this week when Kevin Love blasted Timberwolves' management in an unprovoked screed to Adrian Wojnarowski of Yahoo! Sports. Bulls fans took to the Internet and immediately started clamoring for the All-Star power forward, though acquiring him would be a long-shot if the team doesn't break from its undaring ethos. Perhaps the best hope for getting Rose help comes from a player already under the team's control.

Here's a quick and dirty refresher: the Bulls traded the No. 28 and No. 30 picks in 2011 NBA Draft to jump up to pick No. 23 and grab Mirotic. The Spanish forward's big body and sweet outside stroke made him a first round draft pick, but it's what he's done since that's made some wonder if he could be a future NBA All-Star.

Young players are an abnormality in the Euroleague, but Mirotic has proven himself to a force whenever he's on the court. He's the first ever two-time winner of the "Rising Star" award, given to the best player age 22 and under. While he was impressive in 2010-2011, his numbers shot through the roof across the board last season. He's off to a great start this year, a campaign highlighted by a 17-point, eight-rebound effort on 7-of-7 shooting against Russian team BC Khimki Moscow Region. He followed that up by dropping 18 and six (on 5-of-9 shooting, including 2-of-4 from three-point range) the next game against Fenerbahce Ulker Istanbul.

Mirotic has the people who watch Euroleague hoops incredibly excited about his NBA prospects. Nick Gibson took to Sheridan Hoops this week to again sing his praises in a piece framed around a (very flimsy) proposed deal to bring Pau Gasol to Chicago. It was a weird framework to bring to the story because the Bulls are not trading for Gasol this season, you can bet on that, but Gibson's point remains: Mirotic is too valuable a commodity to deal even if that trade was on the table. OK, then.

More enlightening was an October piece Gibson linked to by Simon Jatsch at In the Game. Jatsch did an analytical examination of Mirotic's evolution and came away giving him rave reviews: the numbers show Mirotic has made major strides as a rebounder, and he's also showing a propensity to get to the foul line more often. These are monumental improvements as far as his NBA future is concerned. Bulls fans are rightfully starting to get excited. 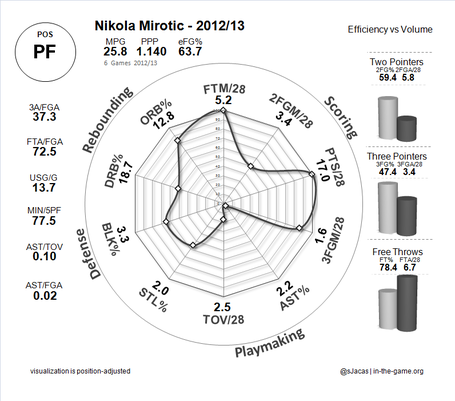 Chart of Mirotic's offensive efficiency this season via In the Game.

Well, don't get too excited. Mirotic isn't dumb, and won't come over to the NBA until it makes sense for him financially. The Bulls and their fans would love to add the 21-year old to the mix in 2013-2014, but it seems more likely he won't arrive until 2014-2015. Mirotic has a contract that includes a buyout of roughly $2 million euros and he also doesn't want to be subject to the NBA's rookie scale. Since teams can only contribute a certain percentage of the buyout, Mirotic wants a higher salary to help pay-off whatever financial obligation is left. Gibson said Mirotic is "worth every penny" of Chicago's mid-level exception and that's likely what it will come down to.

The question now becomes: how willing should be the Bulls be to bank on Mirotic's potential? It's a dicey proposition to hope the 21-year old turns into a legit No. 2 option on a championship contender right away, and the Bulls are already in position to compete assuming Rose returns to full-strength. Which is to say: Mirotic should be viewed as an asset, not a lottery ticket.

Gasol and Dirk Nowitzki are the obvious examples of Euro players turning into superstars, but each has been in the NBA for over a decade at this point. The guys that have came after them haven't been as impressive. Andrea Bargnani has been highly underwhelming as the former No. 1 overall pick of the Raptors. Danilo Gallinari is good, not great, and isn't anywhere near the shooter he was purported to be. Jonas Valančiūnas is a true center that has shown promise this year in his first season with Toronto, and there are a handful of other players around the league who have turned into dependable rotation players. But there's no stars.

Mirotic looks very impressive, but it's in the best interest of Euroleague hype machine to build stars out of their own players. They want Mirotic to be the next Dirk, to be the next Pau, and perhaps he is. The Bulls shouldn't be banking on it too heavily, though. Given his size and scouting report, the player Mirotic reminds of the most could be Toni Kukoc. Chicago waited a long time for Kukoc's arrival and he eventually turned into a key cog on in the franchise's second three-peat. Could MJ have won all of those titles with Kukoc as the team's second best player, though?

Rose is no Jordan and the Bulls would be thrilled if Mirotic turns out as good as Kukoc, let alone Dirk. The Bulls have an intriguing prospect on hand and deserve to be lauded for aggressively targeting him in the draft. Now the real question becomes this: how will Chicago shape the roster moving forward with Mirotic making serious strides?