Chicago Bulls fans have yet to see star point guard Derrick Rose return to the court, but on Christmas Eve they'll have a chance to buy his newest sneaker, the D Rose 3 "Nightmare" edition. The new shoe from Adidas alludes to the Tim Burton film "The Nightmare Before Christmas" (hence the release date) and features a Burton-inspired purple colorway and various glow-in-the-dark features. 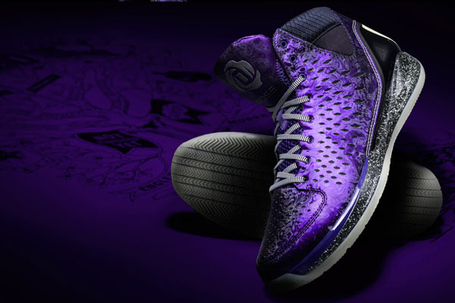 The shoe is a limited release, which could cause mass hysteria at shopping malls and sneaker stores in the Chicago-area in the days leading up to Christmas. The shoes will retail for $180 and will also be available on Adidas' online store.

As for the status of Rose's rehab from a torn ACL, Aggrey Sam of CSN Chicago reports that Rose is still moving along slowly but that he is participating in select parts of Chicago's practices, though he isn't yet taking contact. Per Sam, he was seen after Monday's practice going through shooting drills but does not have much lift on his jumps yet.