An in-depth look at the best and worst lineup combinations for the 2012-13 Chicago Bulls. Has Tom Thibodeau found spots for guys like Taj Gibson and Carlos Boozer to succeed?

Derrick Rose is unavailable and the Bench Mob has been dismantled, yet here we are in December with the Chicago Bulls above .500 and in sole possession of first place in the NBA's Central Division. Tom Thibodeau, take a bow. The Bulls did dip below .500 for the first time since Nov. 7, 2010 (!!!) this year, but the general trends are all positive.

Thibodeau doesn't have access to a dominant lineup when Rose is out -- Richard Hamilton, Carlos Boozer and Kirk Hinrich aren't scaring anyone -- but he's employed Luol Deng and Joakim Noah to help make his most-used lineups net positive groups on the floor (i.e.- they ouscore the opposing unit, on average).

Consider this: Thibs has used 13 different four-man combinations for 90+ minutes this season, and every single one of those units has outscored the opposition. None of those quartets dominate the competition, but they all help the cause. This isn't breaking news, but Thibodeau clearly understands the limitations of his players and the troubles caused by the back end of his bench. Riding his best guys for heavy minutes may not be popular with everyone, but Thibs has put his team in a position to compete for a quality playoff seed if (when?) Derrick Rose eventually returns.

Let's take a closer look at the 2012-13 Chicago Bulls, with some statistical support from the tools on NBA.com/stats.

The Chicago Bulls, According to PER

Most NBA fans are becoming comfortable enough with John Hollinger's Player Efficiency Rating (PER) metric to use it as a tool when evaluating and comparing players, but let's make sure we all understand what PER tells us, and what it doesn't tell us. Hollinger has carefully designed a metric that accounts for certain events: field goals, free throws, 3-pointers, assists, rebounds, blocks, steals, missed shots, turnovers and personal fouls. Offensive contributions are better covered than defensive ones.

PER most certainly does not value defensive contributions fully or properly, because it only takes inputs from traditional box scores (which only record blocks and steals). Hollinger has admitted this is a significant limitation of his model:

"Bear in mind that this rating is not the final, once-and-for-all answer for a player's accomplishments during the season. This is especially true for players such as Bruce Bowen and Trenton Hassell who are defensive specialists but don't get many blocks or steals... What PER can do, however, is summarize a player's statistical accomplishments in a single number. That allows us to unify the disparate data on each player we try to track in our heads so that we can move on to evaluating what might be missing from the stats."

If you keep in mind that PER is a context-neutral metric designed to measure offensive output without doing much to deal with defense, you are probably going to understand why Tom Thibodeau-coached teams aren't PER superstars. Here is a look at the Bulls' roster through the first 18 games of the 2012-13 NBA season: 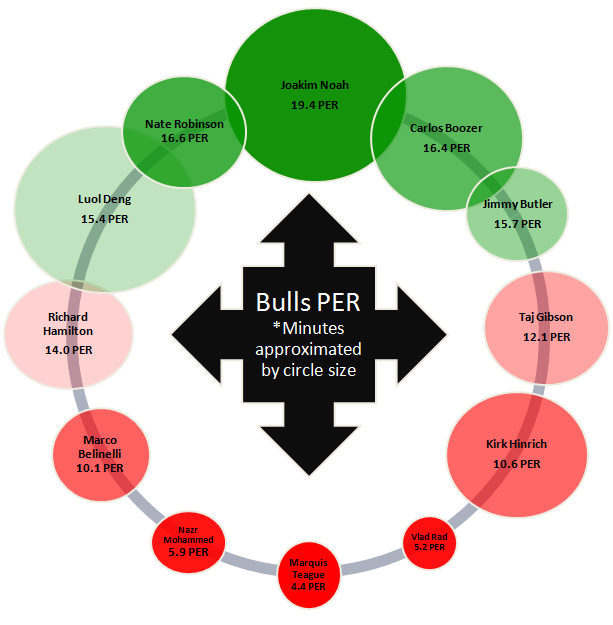 With these lineup pryamids, I am presenting the best and worst lineup combinations the Bulls have used during the year. Offensive and Defensive Ratings are used in place of raw +/-, because the results are easier to digest if every minute of action is expressed on a per-100-possession basis.

This is an accurate expression of what has happened on the floor so far in 2012-13. Things will change and regression will occur, but we don't really have enough information to know what the baseline levels are for any of these lineup combinations. I've done this lineup pyramid exercise twice for the Milwaukee Bucks (Vol. 1 | Vol. 2), and as I told one Brew Hoop reader: "...the 'sample size' caveat will send us into some post-modern basketball conversation if we take it too seriously. We will probably never get enough information to know if each combination is under/over performing relative to its unique 'true talent level.' "

Here's my standard disclaimer for the lineup pyramids:

The sample sizes for lineup combinations are small, so only the most-used groupings are considered, but the information provided below serves to explain what has actually happened so far this year. You can use these numbers in the following manner: When [insert player grouping here] were on the floor, the Bulls outscored (or were outscored by) opponents by a margin of [insert pts / 100 poss #].

Here are the basic selection parameters I use: 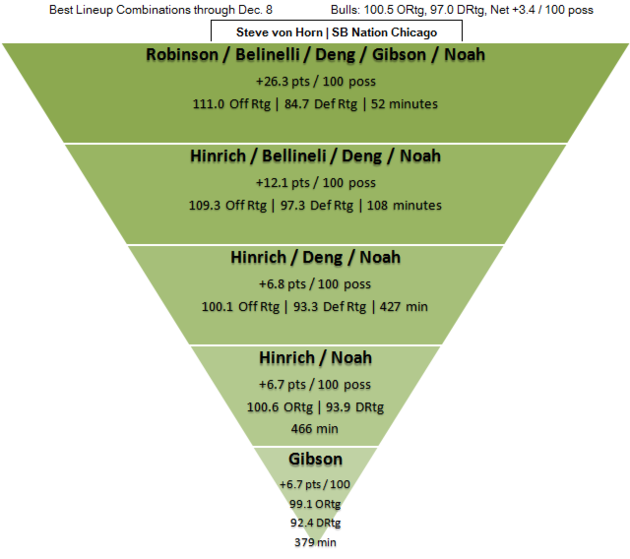 * Marco Belinelli's move from the doghouse to the starting lineup has been a breath of fresh air for a team in search of consistent offense. He may not be the best defensive player, but Belinelli can hit threes, space the floor and handle the ball a bit. I liked the Belinelli signing in the off-season -- in fact, I argued for the Bucks to pursue him back in July to shore up their three-point shooting -- and he should help the Bulls improve from beyond the arc. Here's the chart I created in my Bucks free agency piece during the off-season, which also contains some positive nuggets on Kirk Hinrich:

Let's just say I'm not surprised that Hinrich has nailed a three in eight straight games, or that Belinelli has looked good.

*Thibodeau has used his roster effectively so far this season. The only two players who have negative net +/- ratings on the year are Carlos Boozer and Nazr Mohammed.

*The Bulls are the best team in the NBA at defending the three. Opposing teams shoot a league-low 30.5% from deep (the NBA average is 35.9%), and much of the credit should go to Thibodeau. He likes his teams to "ice" wing pick-and-roll plays, which means he instructs the defending guard to stay on the top hip of the ball handler and funnel the play towards the baseline and sideline, where the defending big man helps out before recovering to the screener.

This approach prevents guard from getting into the lane and breaking down the defense, and it generally makes it difficult for teams to get spot-up opportunities in the corners of the floor. Here is an excellent breakdown of the "icing" technique. If you listen closely during Bulls broadcasts, you will definetly hear Thibs yelling "ice, ice ice" through the on-court microphones.

*Despite Taj Gibson's slow start to the season on offense, his defensive ability has turned him into the one of the team's most impactful players. Noah, Deng and Hinrich all had some of the best marks in terms of individual net rating, but Gibson is the player who emerged with the best number thanks to the huge boost he provides on defense. If his offense starts to come around, he could return to his previous place as an advanced stat darling.

*As noted above, Thibs has excelled at avoiding toxic lineup combinations. Recall my initial note: "Thibs has used 13 different four-man combinations for 90+ minutes this season, and every single one of those units has outscored the opposition."

*Carlos Boozer's sub-par defense is the biggest problem Thibodeau has yet to solve. Boozer is the only regular contributor who puts the Bulls under water when he's on the floor. Opponents have outscored the Bulls by 1.7 points per 100 possessions during Boozer's time on the hardwood, and over 565 minutes that starts to become a problem. When Boozer is on the bench, the Bulls suddenly outscore the opposition by 11.5 pts / 100 poss. Why? Their defensive rating shrinks from 101.4 pts allowed / 100 poss to just 90.2 pts / 100 poss. To state that another way, the Bulls transform from a No. 15-caliber defense into a No. 1-caliber defense when Boozer sits.

*Nate Robinson and Carlos Boozer have shown the tendency to undermine the defensive impact of Luol Deng and Joakim Noah. It makes sense, but it's not a good thing. 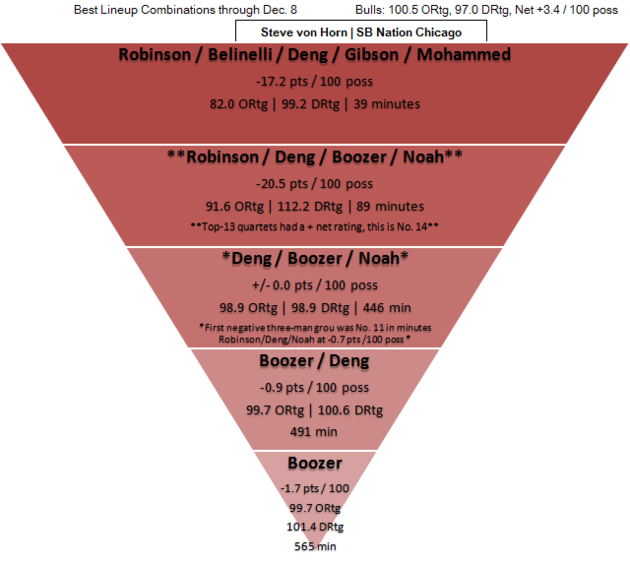 *Statistical support for this story has been provided by NBA.com/Stats.